MONTPELIER: David Deen, a Democrat from Westminster and chair of the House Committee on Natural Resources, Fish, and Wildlife has submitted a bill into the House that could drastically improve the water quality in Lake Carmi.

The bill, which was introduced at the end of last month would shift all the responsibilities for water quality to the Agency of Natural Resources (ANR), but only if ANR designates the lake in question ‘in crisis.’

The bill, as introduced, would also let ANR establish an emergency order to cease, in the watershed of the lake, all agricultural practices that contribute phosphorus to the lake.

Although the funding sources have yet to be ironed out, the legislation would require the State of Vermont to compensate farmers for any losses that are directly contributable to an emergency order.

Locals from the area traveled to Montpelier on Thursday to testify on the bill, including the Vice President of the Lake Carmi Campers Association, Rob Evans.

“While blue-green algae is not a new phenomenon at Lake Carmi, this summer was the worst we had ever seen,” Evans testified, “Many articles have been written, public hearings were held, network news stations filmed from our shores and property owners, town residents and all those who visit and recreate at Lake Carmi were left wondering what does the future hold for our lake.”

Evans told the committee that he has owned a camp on Lake Carmi for a dozen years, but that may not continue if something isn’t done.

“Much like the conversations that Governor Scott has been having about keeping our youth and seniors in the state, many of us who have looked forward to retiring on the lake are having second thoughts and are wondering if Lake Carmi is a safe place to bring our future grandchildren.” Evans testified.

Evans pushed much of the blame onto the agricultural community that sits within the watershed of the lake.

“While we recognize that lakeshores need to be improved, roads surrounding the lake need to be enhanced, continual improvements on camp septic systems need to be completed and creative land management practices need to be explored that slow down and filter out the phosphorous coming into our lake… the problem and the solution– always comes back to agriculture,” said Evans.

The effect of land value and taxes may impact the remainder of the Town. Information that was submitted to the Legislative Committee on Thursday by Peter Magnant indicates that about 23% of the Town’s $2.8 million in total tax revenue comes from lakeside properties. Of those, about 80% paid their most recent taxes in protest to the condition of the lake.

Perry Thomas, a representative of the State’s Watershed Management Division of the Department of Environmental Conservation, also testified to the bill’s impact, this time a detrimental impact, according to Thomas.

“While the Agency appreciates the attention brought to Lake Carmi’s water quality needs by H.730, we are concerned that some of the bill’s language would affect our ability to accelerate work toward meeting phosphorus reduction goals, by undermining working relationships among partner(s).” Thomas wrote. 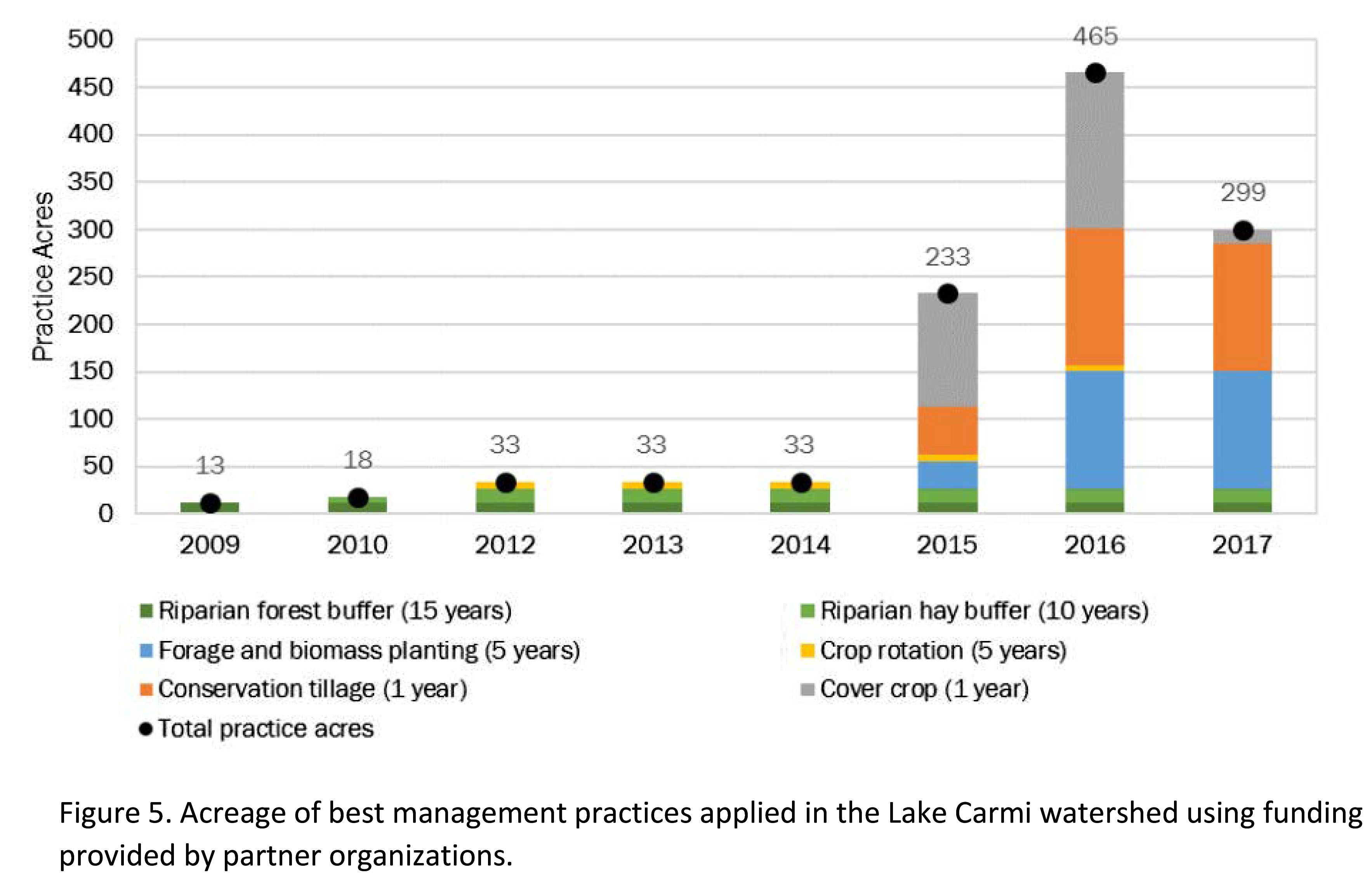 According to Thomas, 2017 was the “perfect storm” for algae blooms in the lake, “unusually high levels of rainfall in late spring 2017 caused erosion of phosphorus-laden sediments that triggered early summer algae blooms. Typical stratification during early summer led to a lack of mixing in the lowest layer and depletion of oxygen by biological activity there. Under these conditions, phosphorus was released from the sediment and builds up in the lowest layer. Cool temperatures for a short period in August caused mixing of the lake column, and the phosphorus in the lowest layer mixed up through the water column. This extra injection of phosphorus caused the intense algae blooms we witnessed in late August and early September. An extended period of unusually warm weather from late September through November caused extension of the cyanobacteria bloom.”

Thomas indicated the hundreds of acres that the State is working with farmers on in order to reduce the impact of agriculture on the lake. A graph provided by Thomas showed a 35 fold increase of the number of acres that was being utilized for best practice from 2009 to 2016.

The lake’s watershed covers 7,710 acres, mostly used for agriculture, according to a newly released report on the lake, authored by an environmental management consulting agency based in Tennessee.

In the short term, it was recommended that the state could install devices to artificially circulate the water up or down in the lake, aerate the lake, or use a process known as alum treatments, which binds the phosphorous to aluminum.

According to the report, mixing the water by circulating it up or downward in the lake would limit the amount of light to which algae could access.

The mixing would also subject the algae to turbulent water, which reduces its growth potential.

The longest term option may come from the alum treatments, according to the report. The average application of alum to a waterbody lasted for about 21 years, and there are no ongoing management or operating expenses attributed to the alum treatment, but the initial expense is expected to be about $660,000 for a full dose on the lake.

There is also an option for a partial dose of alum in the lake with costs starting at about $150,000.

It is estimated that the lake would need 83 tons of aluminum to fully treat the lake.

Steve Beyor who represents Franklin and is the ranking member on the committee receiving testimony over this bill was not available for comment as of press time.

Whatever the decision by the legislature, it’s clearly a bad time, to say the least, for farmers to see higher expenses through greater regulation. Milk prices are still about $2 below the cost of production, per hundredweight, and have been for well over three years. January’s milk check was recently delivered to farmers, with a stark message inside- the number to the National Suicide Prevention Hotline.