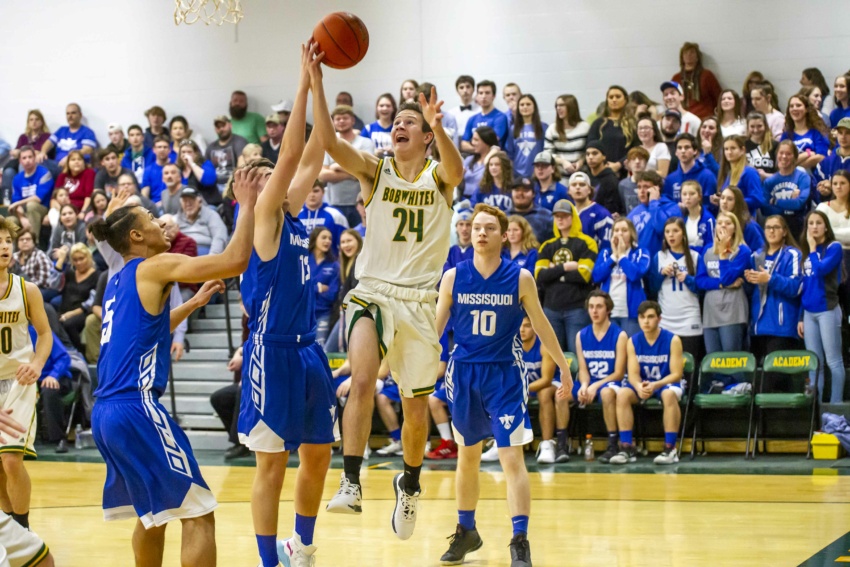 Charlie Yates drives along the baseline for a lay-up against Missisquoi during a December 23rd thriller in St. Albans. BFA won that game, 49-47, and will travel to MVU on Tuesday for the rematch (Ben Kaufmann, County Courier)

The best thing about BFA-St. Albans’ buzzer-beating, 49-47 win over Missisquoi on December 23rd wasn’t the shock of MVU roaring out to a double-digit lead in the first half. Nor was it the pandemonium in the BFA gymnasium as the Bobwhites rallied – pandemonium that made Patrick Gym in March seem like a Tuesday night men’s league game at the Y. It wasn’t the absurdity of 17-year olds making late free throws while their parents nearly went into cardiac arrest in the stands, or even the sight of Kam Dunsmore darting between defenders and selflessly dropping a pass to Nick Voyer for the game-winning baseline lay-up.

No, the best part of that early Christmas-gift-of-a-game for Vermont basketball fans was the simple fact that we’ll be treated to round two this Tuesday in Swanton. The Bobwhites (4-7) and Thunderbirds (8-3) will tip off what’s surely Franklin County’s most anticipated basketball game of the season at 7:00 when the atmosphere inside can be expected to match the name of MVU’s Thunderdome.

That win over Missisquoi in December was BFA’s first of the year and, though two losses followed, it helped BFA avoid a potential 0-5 start to the season. The Bobwhites rallied recently and picked up a difficult road win at Mt. Abraham before a disappointing home loss to Milton on Saturday. Saturday’s struggles for the Bobwhites should be unsettling to Missisquoi; BFA will head into Tuesday incredibly motivated to erase the memory of Milton.

Missisquoi has taken the pain of that Voyer lay-up, and the resulting first loss of the season, and turned it into gasoline thrown on a surprisingly hot year. The Thunderbirds bounced back from the BFA game by capturing the Lamoille Holiday Tournament as part of an immediate three-game win streak. Losses to Mt. Abraham and North Country have been countered with impressive wins over Milton and Lake Region.  A postponement of Saturday’s scheduled game at Middlebury gives the T-Birds a little extra rest before Tuesday; some players were in St. Albans to take in the BFA vs. Milton game.

Historically, BFA has had the edge on Missisquoi one would expect from a school with about 300 more students (the enrollment difference last school year was 837-541) and has 16 wins and 5 losses against MVU in the last decade. Since the Thunderbirds beat BFA in St. Albans as a No. 9-seed in the 2013 Division I tournament, BFA has a 12-2 lead in head-to-head matchups. That record includes a 31-point win in a 2016 playoff game, a possibility which doesn’t exist this season with Missisquoi back in Division II.

In that same seven-year span, there have been thrillers and blowouts. BFA has wins over MVU of 2 (x2), 4 and 7 points as well as multiple wins by 30+ points. After a 62-59 Missisquoi win late in the 2016-17 season helped the Thunderbirds secure a No. 4-seed and make a startling trip to the Division I final-four, BFA dominated MVU until this year. The head-to-head matchups between the two since that playoff game consist of Bobwhite wins by 31, 29, 27 and 13 points before the two-point victory this season.

Trying to compare common opponents to get a clue about Tuesday requires a bottle of Excedrin. That Milton team that tuned BFA up on Saturday? Missisquoi beat them handily. The Bobwhites logged a fairly easy, 16-point win over the same Vergennes Commodores who were tied at 49-49 with MVU with under two minutes to go. Both beat Enosburg and both lost to North Country. MVU lost by nine to Mt. Abraham, BFA beat the Eagles by six. You can toss this paragraph out ahead of Tuesday’s game – I assure you both teams will.

We’ll skip a rehashing of the entire first game (a link to that game story can be found in the first paragraph) and take a brief look at what might happen Tuesday. I cannot stress enough that this is what MIGHT happen – trying to predict a BFA/MVU matchup in anything from soccer to chess is a fool’s errand. Everything is on the table when these two get together, but here’s what I’ll be looking for on Tuesday:

-BFA senior Taylor Yates is the best player in Franklin County. There are very few teams in Vermont who can beat BFA if Yates gets hot from three (or decides he’s going to try to log 15 assists; he has a Magic Johnson switch that should terrify opponents if anyone else from BFA is hitting shots). Yates was held to 12 points in the first meeting, so look for MVU to try to get him in foul trouble and force tough shots.

-MVU relies on a big-three model. Ethan Creller, Patrick Walker and Gabe Unwin provide a massive percentage of Missisquoi’s points. Dunsmore held Creller to just 11 points in December and MVU will likely place a priority on getting the senior some better looks on Tuesday. That big three will need to account for around 45+ points (barring a far-from-impossible 42-36 final score).

-Someone other than that big three will need to have a career night for MVU. Matthew Curtis has been Missisquoi’s next most consistent offensive threat and he, too, will need a big night Tuesday. Colbey Theberge will have a say in Tuesday’s outcome defensively, but a good night offensively from the T-Bird senior could mean an MVU win. Caleb Johnston is another dark-horse candidate for extra Missisquoi points.

-Kam Dunsmore, a two-sport standout in the fall, was the most impactful player on the floor in December. He led all scorers with 16 points and shut down Missisquoi’s biggest scoring threat. Dunsmore can impact an offense without scoring (See: the final play of game one), but if he’s making shots it could be a long night for MVU.

-BFA is deeper than Missisquoi (again, school size matters). MVU absolutely must have good nights from its big three, but the Bobwhites can better handle an off night from Yates or Dunsmore. If MVU can stop those two, they still need to worry about Nick Voyer and Case Ballard in the post, Hunter Livingston, Logan Keelty, Ben Archambault, Charlie Yates and freshman Noah Earl up top.

-Home-court matters. The comfort of routine aside, when these young men are standing on the foul line with 10-seconds left in a tied game, it’s better to not be in the enemy uniform. It’s worth noting that all of MVU’s other teams have the night off from games, so we can expect a rowdy student section.

-Defense wins championships, offense will win Tuesday’s game. Both of these teams pride themselves on tenacious defense and an ability to slow even the most prolific scorers. But at the other end, both teams have struggled to generate offense. Missisquoi topped 70-points  just once and needed overtime to do so, BFA has yet to score 70 and has only bested 60 points twice. It may sound a little Yogi Berra-ish, but the team that scores the most points Tuesday is probably going to win; victory will go to the team that focuses on that simple idea.