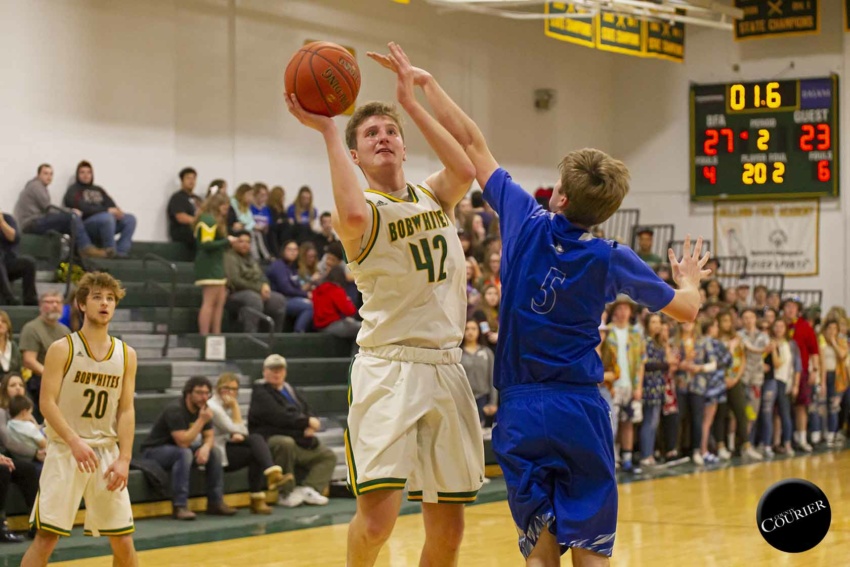 ST. ALBANS – BFA-St. Albans needed its standard defensive showcase against a tougher-than-advertised Vergennes Union team. The Bobwhites had difficulty scoring but never trailed in Monday’s 52-36 win over the Commodores.

11 different players scored for the Bobwhites (3-6) on Monday, though none tallied more than 10 points against the winless Commodores (0-9). BFA coach Matt Toof said his team showed both its strengths and weaknesses in the win.

“We have to figure something out on offense,” said Toof, whose Bobwhites have only surpassed 60 points once this season. “I know every team in every sport preaches defense, and we definitely do – we put a premium on defense. But what I’m most concerned about right now is our offense.”

The defense certainly was impressive, as usual, for BFA. Except for a small push at the end of the first quarter into the early second which saw VUHS come within two points on a few occasions, the Commodores never looked poised to break down BFA. Up just 29-23 at halftime, the Bobwhites held Vergennes without a field goal until 45-seconds remained in the third quarter and built a comfortable, 41-26 lead going into the fourth.

The offensive success BFA did have on Monday came from sharing the ball and taking advantage of a big edge in size on the Commodores. Ben Archambault and Nick Voyer propelled the hosts to an early 10-2 lead and each played a hand in the other’s points. Taylor Yates (10 points) and Kam Dunsmore (eight points) both got in on the first-quarter action and helped BFA to a 13-4 lead before Ben Curtis hit a pair of threes to help VUHS salvage a 15-10 scoreline after a quarter.

Sophomore Charlie Yates (five points) blocked a Commodore shot to give BFA a lift at the first-quarter buzzer, then hit a three early in the second quarter to give extend a shaky Bobwhite lead from two to five points. BFA’s lead slipped dangerously low again before the younger Yates stole the ball from Vergennes with a diving effort and got it to Taylor while falling to the floor. Taylor Yates ran as the clock neared zero and thought about his signature deep-three, but opted to drive to the basket and made a buzzer-beating runner to give BFA a 29-23 lead at the half.

BFA’s size advantage helped it to pull away in the third. Taylor Yates powered through a foul, making the lay-up and free throw before Voyer scored four straight – all on the put-backs of offensive rebounds. Voyer scored six points in the third quarter which saw BFA increase its lead from six to 15.

“The last four games, really, we’ve been giving Nick a lot more touches and it’s good,” Toof said of Voyer, who finished with nine points. “We need that dimension in our offense. We need an inside presence, an inside option that’s going to open things up for the other guys on the outside.”

Defense and post-play may have won the game for the Bobwhites, but Monday’s highlights came via freshman Noah Earl. Earl closed the third quarter with a baseline run and up-and-under reverse lay-up that brought the crowd to its feet and buried any hope of a Commodore comeback. The youngest player on the floor Monday impressed again in the fourth with a steal and pump-fake which made his defender nearly trip on Earl’s head going for a block – Earl calmly settled and dropped in the layup.

“Our message to Noah this week is ‘You’re not a freshman, you’re a varsity player’,” Toof said of Earl. “I think he was being a little passive where he wanted to get rid of the ball too quickly instead of looking for things on his own. That play he had down there on the baseline, man, he saw things ahead and it was a flash.”

“We see those flashes in practice too, he’s capable. He just doesn’t know it yet all the time. That was good, I hope he builds off of that.”

Earl finished with as impressive four-point night as can be had. On a night when it was clear BFA needs more offensive options with Taylor Yates – a senior – drawing each opponent’s best defenders, the thought alone of another 3.5 years of Earl’s playmaking is worth the price of admission.

“When Yates isn’t hitting we need to figure out who’s going to step up and start scoring,” Toof said, noting that his Bobwhites aren’t exactly poor offensively, but need to have higher levels in sight.

“I know we can score more in transition, I know we can push the ball better. We need to start hitting shots, we need to hit shots on the foul line. There are a lot of little things that great teams do that we’re not doing right now offensively.”

The Bobwhites travel to Mt. Abraham for a tricky matchup with the Eagles and high-scoring Liam Kelliher on Wednesday. The trip to Mt. Abe’s “Brick Oven” gym, which can make the sauna that is BFA’s gym seem like an arctic paradise and has the hometown-friendly acoustics of a two-car garage, has tripped up visiting Lake League opponents for years.

An always-tough home game against Milton on Saturday follows as the Bobwhites settle into their league schedule, which consists of an unending line of opponents bringing their best in hopes of making a statement against the Division I Bobwhites.