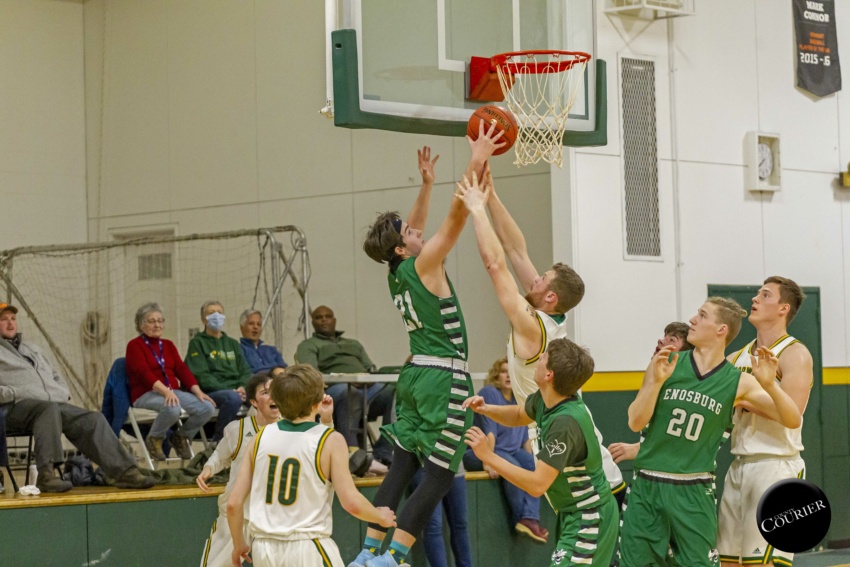 ST. ALBANS – Playing up two divisions proved too tall a task for Enosburg on Friday. The Hornets traveled to St. Albans to face Division I BFA and were thoroughly dispatched 55-25.

BFA (2-4) saw points from 10 different players on Friday and held the Hornets (4-4) scoreless in the fourth quarter as they get ready for a very different opponent on Monday in a South Burlington team fresh off handing CVU its first loss of the season.

Taylor Yates’ 14 points and nine from Nick Voyer paced the Bobwhites, who had Enosburg doubled up 14-7 at the end of the first quarter and again at 26-13 when halftime came around. Hunter Livingston, Kam Dunsmore, and Ben Archambault each chipped in six points for BFA.

“That’s what we were saying, make that extra pass,” Toof said. “We did that. I still think we could move the ball better, it’s all about getting the ball from one side of the floor to the other because when that happens, there are more chances that they make a mistake. You want to make the defense have to make choices.”

Facing the most daunting opponent on its schedule, Enosburg had a tough time holding possession and generating offense. Hornet coach Chad Lovelette acknowledged the difficulty of taking on an opponent which faces teams like Mt. Mansfield and South Burlington instead of Winooski and Oxbow, but felt his team could have offered much more challenge to the Bobwhites.

“It’s disappointing and frustrating,” Lovelette said when asked about the difference between BFA and some of the teams Enosburg is more accustomed to facing. “That kind of stuff doesn’t take skill. Effort doesn’t take any skill.”

After going up 5-3 in the early minutes of play, Enosburg surrendered an 11-2 run to end the first quarter before being outscored 12-6 in the second. The Hornets’ were best in the third quarter but still surrendered a four-point advantage to BFA and trailed 42-25 entering the fourth.

Lovelette’s desire to see more from his team was far from blind optimism. A year ago in this same gym, his Hornets topped BFA 59-51 before the Bobwhites bounced back in a February meeting to beat Enosburg by 24.

Toof said BFA didn’t forget what Enosburg was capable of when underestimated.

“Enosburg played pretty well defensively, just they couldn’t get into a rhythm offensively tonight and I know they can. I know Tommy Benoit, that kid is dangerous and we kept him pretty quiet tonight. I don’t think it’s any knock on him, I think we did a good job defending him.”

Toof credited an improved zone with frustrating Enosburg defensively and a willingness to rely on low-post play rather than outside shots with leading his Bobwhites up the scoreboard. He did note that both areas are still in need of improvement despite Friday’s result.

“Defensively I think our zone worked better, the best it’s worked all year. That’s been a work in progress so it’s good to see results like that,” Toof said. “We also wanted to get some more touches inside but we did that. We still need to execute better inside, we still need to score more in there, but at least we’re looking there now.”

Toof knows that improvement will need to come quickly with a trip to South Burlington slated for Monday. The Wolves are 5-3 on the year but the only one of those losses to come by more than three points was to a St. Johnsbury team universally considered to be one of the top two in the state. South Burlington’s last game was a startling, 16-point win over a CVU team which had been 6-0 and the only other one in the “Best In State” discussion with St. Johnsbury.

The turnaround from Enosburg to South Burlington is about as jarring as one can possibly see on a Vermont high school basketball schedule. That’s no knock on an Enosburg team which will be more than fine in Division III, but simply a geographical truth. Enosburg’s middle/high school enrollment is 444 students and South Burlington has 940 in just high school — there are two vastly different player pools between BFA’s last opponent and its next.

“Our intensity on defense has to be there and we’ve got to be able to play against pressure,” Toof said. “That’s the biggest jump I think from Division II or Division III to Division I is just the size and the speed and the pressure. There’s very little room to do anything and I know that’s the way South Burlington is going to play.”

The Bobwhites and Wolves tip-off at 6:30 on Monday in South Burlington. Enosburg has a week off before another tough matchup at Division II Milton (6-1) next Friday. The Hornets will get another crack at BFA on February 8.

An earlier version of this story incorrectly stated that BFA beat Enosburg when they met last January. Enosburg won that meeting, 59-51.