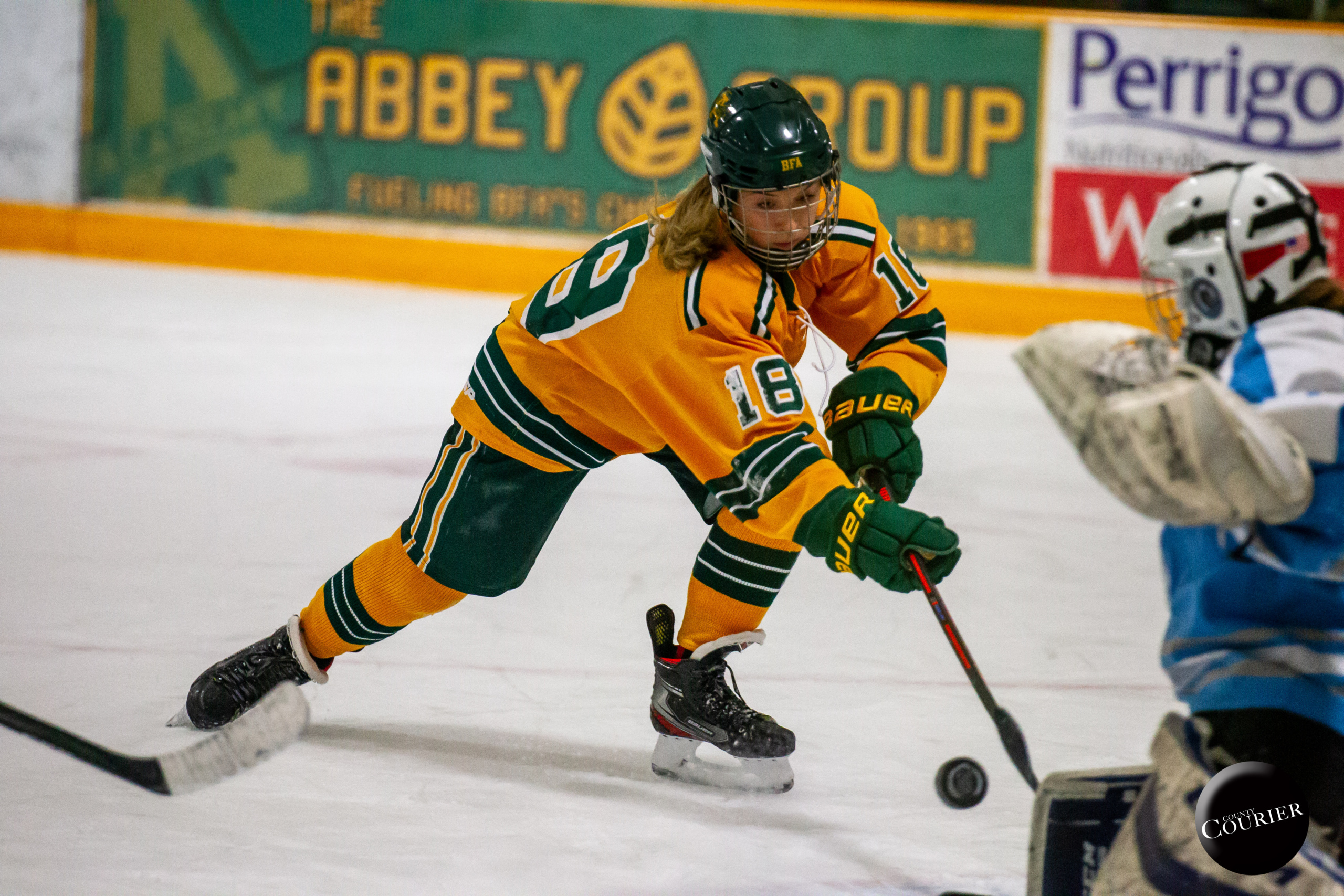 ST. ALBANS – It was no easy task trying to find the back of the Lyssa Tan’s net on Wednesday, but even a 60-save performance from the South Burlington goaltender couldn’t hold off BFA-St. Albans as the Comets pulled away for a 6-0 win.

A fifth straight victory for BFA (5-2) was well earned and not always the runaway the final score indicates, though St. Albans did hold South Burlington (1-3) to a single shot on goal. The Comets led 1-0 after the first period and that same scoreline held for some time before the hosts scored twice in the final five minutes of the second.

“She played very well, it was a lot of shots she saw and she made the first saves,” Comet coach Luke Cioffi said of Tan. “I think she got tired, the other team got tired, we kind of wore them down.”

In the end, it was a number of performances from BFA which decided the game: Sophomores Calla Bourdeau and Sophie Zemianek each scored twice, Jodie Gratton tallied a goal and two assists, the defensive pairing of Emma Lovelette and Rowan Howrigan proved a formidable two-way threat, and nearly everyone who skated across center ice for BFA was successful in creating shots for Tan to stop in new and exciting ways.

“As a team, we’re happy with where we’re at in terms of who’s doing what and we’re moving in the right direction,” Cioffi said. “I think we’re comfortable. We feel like we’re getting better, we’re starting to gel, we’re seeing a lot more plays develop.”

BFA did jump ahead early when Gratton took a nice centering pass from Meghan Connor and lifted a high shot past Tan for a quick 1-0 Comet lead just over three minutes past the opening whistle. Lovelette collected the second assist on that goal.

Good chances over the next 20 minutes from Gratton, Connor, Bourdeau, Lovelette, Carolyn Perry, Chiara Skeels, Kami O’Brien, Zemianek, Maddie Montagne, Morgan Shoram and most everyone else in a yellow jersey were turned away by Tan.

As the final five minutes got underway in the second period, Shoram assisted two goals from Bourdeau exactly three minutes apart to help BFA pull away. The first goal, by all reasonable expectations, should have been a Shoram goal but her shot was somehow blocked by Tan. Bourdeau was in the right spot to knock in the rebound for a 2-0 lead. The second goal of the period came when Shoram intentionally passed to Bourdeau in the slot and though her shot appeared to have been stopped for a moment, it slipped through to give BFA a 3-0 lead through the second.

Though South Burlington didn’t threaten much, there were a couple of scares while the game was still relatively close. With the score still 1-0 early in the second, South Burlington had a breakaway thanks to some fortunate timing around the end of a penalty. Howrigan raced back and ended the scare with a poke-check. In the waning seconds of the second with her team now up by three, Howrigan again prevented the Wolves from capitalizing on a breakaway chance.

Cioffi recognized the strong play from Howrigan on Wednesday, also noting that the defensive contributions come from the entire roster when holding an opponent to a single shot.

“Rowan played very well. Defensively she just jumps out, she’s aggressive to take away the puck and skate into the body and take that away,” Cioffi said.

“I thought our forwards, for the most part, did a good job of back-checking and providing support for our D when they’re coming down hard. Last couple of games we’ve had that where everybody kind of chips in.”

After Tan’s 25-save second period, BFA was able to take better advantage of South Burlington in the third. Gratton poked a loose puck to Zemianek for an easy finish and a 4-0 lead during a four-on-four stretch with just under nine minutes to go in the final frame. Hailey Savage set up a rocket slapshot from Abbie Casey less than two minutes later and Perry deflected that shot in for a 5-0 BFA lead.

And after failing as a team in nearly 60 attempts to get a first-shot cleanly past Tan, Zemianek’s one-timer with 1:37 left in the game may just have gone through any padding of Tan’s if she’d been able to get it in front of the puck. That score was set up by Skeels and Gratton and gave BFA its final, 6-0 scoreline.

Now winners of five straight — the last two by a combined 18-0 — BFA is settling into what’s been fairly typical through the first part of most of its first 20 seasons. The Comets’ start with the toughest challenges they can find in the region, this year losing to Hingham (MA) and Potsdam (NY) and edging Hanover (NH), before settling into league play.

Cioffi knows his team is in for tougher tests than its most recent games. Middlebury (4-1) has had an impressive start to the season and comes to visit Saturday. More contests with an Essex team BFA beat 2-0 in the Hanover tournament loom, as does currently undefeated Burlington-Colchester (6-0).

“The tough schedule kind of allows us to see where everybody is right off and now we can kind of take a breath a little bit and see what’s going on,” Cioffi said.

Comet goalie Madeline Hungerford will expect to be a bit more challenged in the pursuit of her fourth straight shutout when the puck drops on Middlebury and BFA at 5:30 on Saturday at Collins Perley.