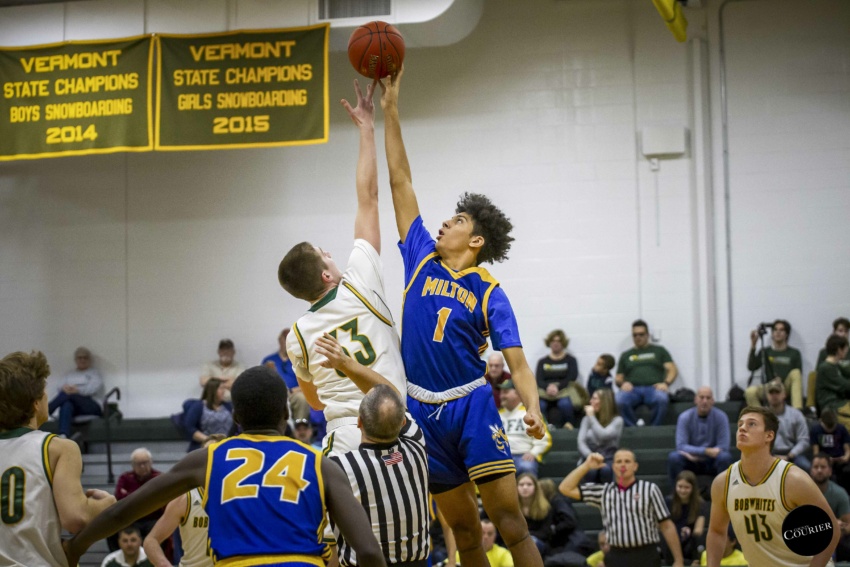 ST. ALBANS: A shorthanded Milton (8-3) squad made the short drive to St. Albans (4-7) for a matinee game Saturday and left with a 59-45 triumph over the Bobwhites to reach the 8-3 mark on the season.

“We are a young team, and today we were playing without our only senior. We have three guys that are sick, and a rotation of eight players. We weren’t sure what guys were going to step up, but we got some good scoring from the guys that came off the bench today,” Milton coach Chris Brown said.

The offensive side of the ball was a struggle for both teams in the opening quarter as each squad scored just seven points. Furthermore, neither team had a score that didn’t come from either a triple or a free-throw in the first frame. Kam Dunsmore and Taylor Yates had the two first-quarter three-pointers for the Bobwhites, while Kyle Brown and Brandon Dallas Jr. had the two-three pointers for Milton.

The trend continued well into the second quarter as Milton began with back-to-back triples to stretch their lead to a 13-7 margin.

The first two-pointer of the game came with just over five minutes to go in the second quarter thanks in part to a Nick Voyer lay-in off of an offensive rebound. Even so, despite a significant size advantage, the Bobwhites struggled to secure rebounds on both the offensive and defensive ends against a stingy Yellow Jackets squad.

“Our defense held strong, and we rebounded very nicely against a St. Albans team that has some great size,” Brown said.

Milton translated their advantage on the boards into points and outscored BFA by seven points in the second quarter to take a 24-17 lead into the intermission.

Milton stretched their third-quarter lead to eleven points by the tail end of the frame. The Bobwhites whittled the lead back to single digits briefly, but ultimately the Yellow Jackets took a commanding 44-33 lead into the fourth.

The major storylines of the fourth quarter were Milton’s inability to make free-throws and close the door on BFA, and the Bobwhites inability to formulate any kind of consistent offensive attack.

Too often BFA threw up wild shot attempts rather than getting set, and running through an offensive play.

Even with Milton missing seven consecutive free throws in the final minutes of the fourth quarter, BFA was not able to carve into the Yellow Jackets lead.

Inevitably, the eleven point lead the Yellow Jackets took with them into the final quarter was enough to overcome their woes from the charity stripe, and propel them to victory.

“We shoot close to seventy-percent as a team on the year, so once we got to the foul line, I thought we’d be able to put the game away but that wasn’t the case,” Brown said.

Milton’s Kyle Brown finished as the games leading scorer with his 22 point showing.

“I think the play today of Caden Button who doesn’t always necessarily put the points up was solid. His defense, ability to move the ball and the other little things that he does is awesome,” Brown said.

For Button, it isn’t the individual stats that matter to him but making sure he can do his part to ensure his team succeeds, and with the victory over BFA, he likes where his is team is moving forward.

“I thought we played great defensively, especially down the stretch. Winning is a huge boost for us, beating them is a big help to our confidence,” Button said.

Outside of Button, Brown thought the play of Mathis was instrumental in the victory.

“Colin Mathis is one of the most dominating guys that changes the game. Whether it be passing, scoring or rebound, he is a dominating guy on the floor,” Brown said.

The Bobwhites were paced by 11 point scoring efforts from both Dunsmore and Yates. Livingston finished the game with 9 points, Nick Voyer added 6 points, Colin Jolley tossed in 3 points, Logan Keelty and Case Ballard each tallied 2 points, while Noah Earl rounded out the BFA scoring with 1 point.

With the loss, the Bobwhites drop to 4-7 on the season. Things don’t get any easier either as a trip to rival Missisquoi looms where the 8-3 T-Birds will aim to exact revenge after a last-second loss in December.

As for Milton, they will square off against a 6-6 Mt. Abe squad this coming Tuesday.