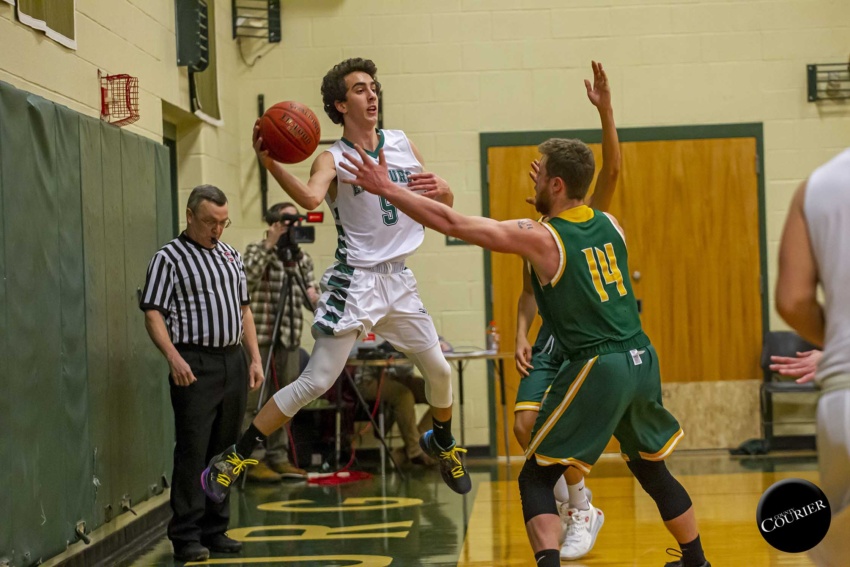 ENOSBURG – The present and future of Franklin County basketball duked it out in Enosburg on Saturday. BFA-St. Albans senior Taylor Yates and Enosburg freshman Devyn Gleason combined for 13 three-pointers and 25 points each as Yates’ Bobwhites pulled away for a 69-48 win.

Both teams entered the day .500 on the season, though the Division I Bobwhites (8-7) had demolished Enosburg (8-9) by 40 points in St. Albans in January. This go-around was a significant improvement for the Hornets, who were within reach of the lead in the fourth quarter before Yates hit a trio of threes to help BFA pull away.

“I thought that overall we played a way better game, first half and second half against them than we did the first time,” said Hornet coach Chad Lovelette. “We competed. The first time it was a joke, we didn’t show up.”

One of those improvements for EFHS came in preventing BFA from getting good looks at the hoop. Yates and the Bobwhites were often relegated to shots from well beyond the three-point line. Yates, who could easily play center for BFA if they didn’t already have Nick Voyer and Case Ballard excelling inside, isn’t really constrained by standard difficulty levels for shooters.

“He was putting up some shots when the game-plan was to kind of look for easy shots, but he was putting them up and they were going in,” BFA coach Matt Toof said of Yates, who hit three from beyond the arc in the both the first and last quarters. “So (assistant coach Dan) Reyome and I were kind of looking at each other like, alright let’s go with it.”

“Honestly, he’s taking shots that I’m happy with,” Lovelette shrugged. “You know, those are bad shots, but they’re going in.”

In a very different game from January’s 66-26 BFA win in St. Albans, the Bobwhites needed extra firepower against Enosburg this time. More than three minutes passed before either side failed to score on a possession and BFA needed a Yates three at the first-quarter buzzer to take a 20-15 lead into the second. A 7-0 run to close the second quarter was necessary for the Bobwhites to have a slightly comfortable, 35-26 lead at halftime.

It’s safe to say every Hornet played better on Saturday than in January’s meeting, but the most significant difference Saturday was the play of Gleason. The Enosburg freshman hit the first three three-pointers he took, helping EFHS to an early 11-9 lead. Gleason drew uncalled contact on his fourth attempt and it still nearly went in, rattling around the rim before falling out. Gleason opened the second quarter with two quick baskets to cut BFA’s lead to 20-19 then answered a 6-0 Bobwhite run by hitting his next three-point attempt.

Gleason ended the day 7-10 from beyond the arc, despite the best of BFA’s attention.

“We like to say nobody takes us by surprise,” Toof said of Gleason, who was a nonfactor in the first meeting between BFA and Enosburg. “We watch a lot of film and everything, we know he’s a hard worker. Honestly, we didn’t think he could shoot that well, but he can, he can and he proved us wrong. He’s a really good player, is he only a freshman?”

Toof’s question about Gleason’s class was in jest, a hopeful ask that there had been a roster misprint. But when asked if he was looking forward to three more years of trying to stop Gleason, Toof’s answer was a very authentic and emphatic, “No!”

BFA does have the luxury of utilizing Kam Dunsmore and Logan Keelty, seniors who shared Gleason duty for most of the day.

“That’s the thing looking forward,” Toof lamented. “After Dunsmore and Keelty leave, those two guys are elite on-the-ball defenders. Those are going to be huge voids to fill next year.”

Toof acknowledged that despite holding Gleason to a few dry spells, there was no stopping him on Saturday. At one point, Toof said with a smile, BFA attempted simply to fight youth with youth.

“You’ve got to try different looks,” Toof said. “Keelty’s a great defender and he was still scoring on Keelty. So we said let’s try (freshman Noah) Earl, he’s lengthy, he’s a freshman so we can go freshman against freshman.”

On a 10-1 run to open the third quarter, BFA got its typical help from Yates and five points and an assist from Dunsmore, who finished with 13 total points. But contributions from Keelty and Ben Archambault were also key to that run which gave BFA a cushion it wouldn’t surrender.

Toof said Archambault was, and often is, an unsung hero for the Bobwhites.

“I also think Ben Archambault did a lot of little things on defense that people don’t recognize, he deserves some credit.”

Enosburg needed much more than just Gleason to hang with the Division I Bobwhites on Saturday. Owen McKinstry scored all six of his points in the second half as Enosburg tried to fight back. Shea Howrigan and Ethan Williams each chipped in four points and Aidan Kelly and Gavin Combs scored three apiece.

Lovelette says the improved performance and experience of 64 minutes against a program like BFA can be a major asset to the Hornets as the postseason arrives. He says some of the clearer missteps on Saturday can be worked on as Enosburg hits the home stretch.

“I thought we just shot ourselves in the foot,” he said. “A turnover here, a turnover there when we had chances to get back into it.”

“They’re a good team, they’re a strong team,”  Lovelette added, referring to BFA. “So when things don’t go your way, whether it be a call or you think you got fouled, you’ve got to stay in the game. That’s where we’ve really got to improve as we get toward the playoff. When you get to the playoffs, they put the whistle away a little more and you’ve got to be tougher.”

The Hornets return to action Tuesday at home against Milton.

For BFA, things are beginning to click at the right time. Registering its highest point total of the season on Saturday, the Bobwhites topped 60 points for the third straight game after only achieving that feat twice in its first dozen contests.

Earl drained a pair of fourth-quarter threes and joined sophomore Charlie Yates with seven points apiece. The offense those two combined for is all well and good, but the pair are also the most likely answers to Toof’s worry about replacing Dunsmore and Keelty’s backcourt defense next season.

Ballard and Voyer were also vital defensively on Saturday, often by presence alone forcing Enosburg to stay out of the lane. The two BFA big men each finished with four points. Hunter Livingston added three points, which came on a sorely needed shot from deep during BFA’s 7-0 run to close the second quarter. Keelty and Archambault added two points apiece for BFA, which travels to Vergennes on Tuesday.