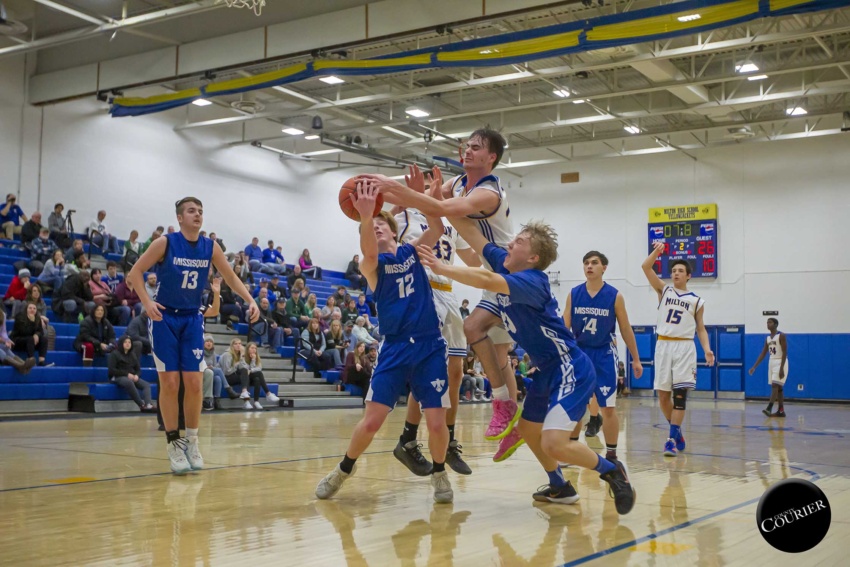 Dallas Jr. led all scorers with 21 points, including 16 in the first half for Milton (11-5). Brown tallied 19 points and Mathis added 13 to help Milton avenge a January loss in Swanton. The Thunderbirds (10-6) and Yellow Jackets entered the day with identical records and sat next to each other in the Division II rankings.

Missisquoi coach Matt Walker lamented the struggles of his team away from its Thunderdome but noted that once again on Saturday the T-Birds nearly found a way to win despite having an off-day.

“We’re 9-1 at home and neutral sites and 1-5 on the road. We’re just two different teams,” Walker said. “We’ve gotten beaten soundly twice, both on the road to Middlebury and North Country. All the rest of the games we’ve been right there every time.”

Gabe Unwin led MVU with 19 points and Matthew Curtis scored 14. Ethan Creller and Patrick Walker each scored nine for Missisquoi, which turned a second-half deficit as high as 11-points into a three-point game midway through the fourth.

Ultimately, Milton’s built just enough of a lead on the backs of Dallas Jr., Brown and Mathis – the trio accounted for all but two Yellow Jacket points in the first half as the hosts took a 39-28 lead.

Brown was most pleased with his team’s ability to prioritize defense when it needed to on Saturday.

Milton was edged in the third quarter and its lead fell to 48-41 entering the fourth. The key in holding Missisquoi at bay came not from the big three which carried Milton for most of the day, but from junior Michael McNeil. McNeil hit a late three in the third quarter to extend the Yellow Jackets lead from six to nine points, then countered an MVU free-throw to open the fourth with another three to put his team’s lead back to nine points with seven minutes to go.

“Mike McNeil was a star today,” Brown said. “Not just the threes, but his defensive switching was really good today. That was part of the reason why we won.”

Brown also praised the defense of Dallas Jr. and Caden Button. The duo was primarily tasked with slowing Walker and Creller, who had combined for 36 points in MVU’s 68-45 win in January. Creller was held scoreless for three quarters and Walker was limited to three field goals on Saturday as Milton kept each to single-digit point totals.

After a Creller three and a post-up from Unwin reduced Milton’s lead to 59-56 with under three minutes to play, Milton’s big scorers came up with the defense Brown had been asking for to pull away. Mathis, who had been a monster in terms of both rebounding and blocks all game, came up with his biggest block of the day and Kyle Brown – known mostly as a sharpshooter – stood his ground on defense to crush MVU’s momentum.

“They got it down to three points and Kyle Brown took a charge late in the game when it was tight,” Coach Brown said. “I really think that was a turning point. It would have been two points for them in a tight game but we came down and scored on the other end.”

Coach Brown also noted to the mental toughness of his team, which consists almost entirely of sophomores and juniors.

“I liked our composure down through the end. We didn’t have a senior in today’s game, so like MVU we’re young – probably younger,” Brown said, alluding to a Thunderbird team comprised mostly of juniors.

McNeil finished with six points, Kayden Burke added two and Button finished with a point for Milton, which travels to Enosburg on Tuesday.

Mental toughness was also evident from Missisquoi on Saturday. Playing below its potential, the Thunderbirds may have been as close as an offensive foul away from stealing a win from Milton.

“We dug a big hole,” Coach Walker said. “Fought back all the way through. We were down 11 at the half, seven going into the fourth, and we got it down to three. We had chances; we missed a lay-up, got blocked on another, so we were there.”

Colbey Theberge scored three points for MVU but was limited by foul trouble for most of the second half on Saturday. Caleb Johnston also added three vital points on a first-quarter shot to prevent Milton from running away when it came out on fire in the opening minutes. Owen Charleston added two points for Missisquoi, which hosts a potent North Country (12-3) team on Tuesday.