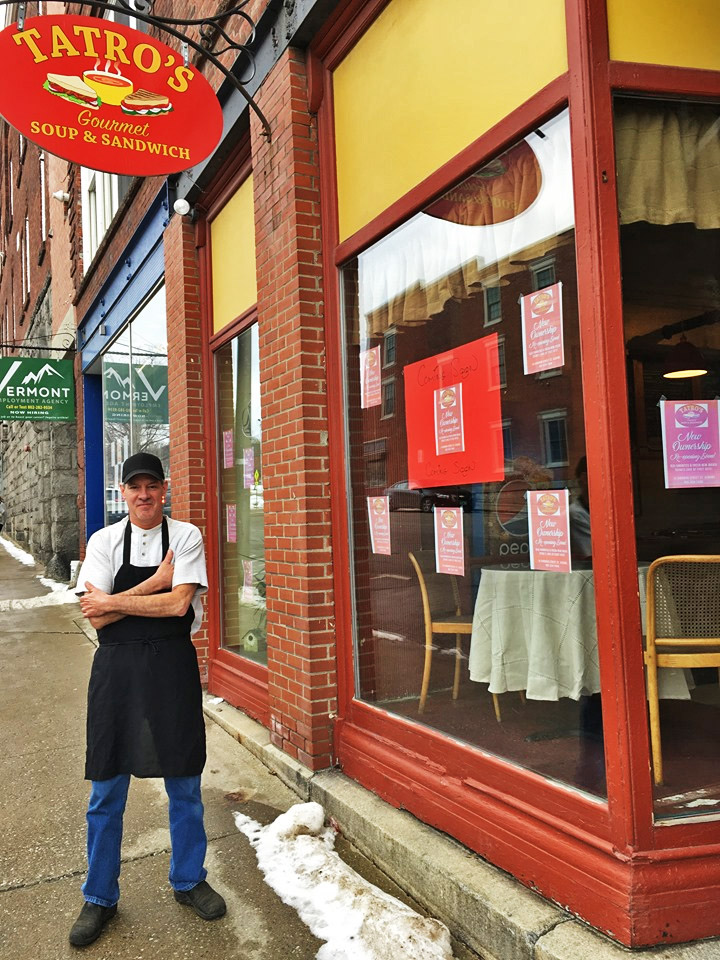 ST. ALBANS – Those who were disappointed to learn of the sudden closure of St. Albans lunchtime staple, Tatro’s Gourmet Soup & Sandwich, last month can let out a sigh of relief. The popular shop has been purchased and will be open in short order under new ownership.

Jim Scouten of St. Albans bought the business last week and aims to be open sometime during the week of February 10th under the same name. Scouten emphasized that customers can expect minimal changes, especially in the early going.

“Tatro’s has been around for years and has a great reputation in the community,” Scouten said. “I just wanted to keep that going instead of starting from scratch.”

Addressing concerns many had upon the unexpected closure of the Kingman Street shop in January, Scouten offered reassurance. Existing gift certificates and “Gold Card” specials for Tatro’s will still be honored. Scouten has also made efforts to rehire the workers who found themselves suddenly unemployed when the business was closed.

The County Courier broke the news of the sudden closure of Tatro’s in this story.

“We’re trying to get all the girls back,” he said. “Unfortunately, some had to move on due to the uncertainty, but we’re trying.”

Scouten added that while some of the core of Tatro’s employees will be able to return, he is looking to hire some new part-time workers and anyone interested should stop by the shop.

Scouten’s partner of 32 years, Kim Murphy, has been a longtime employee of Tatro’s and was one of those who lost her job last month. Murphy and her co-workers made sure all the perishable food in the shuttered restaurant was donated to the local homeless shelter, just two doors down the street, upon learning of the closing. Murphy will now be part of the familiarity customers can expect through the ownership transition.

Along those lines of familiarity is the temporary return of original owners Gary and Lisa Tatro in an advisory capacity. The Tatros, who helmed the shop for its first decade before selling it a couple of years ago, will be assisting Scouten through the re-opening.

The menu, prices and even the decor at Tatro’s will stay the same, though Scouten was adamant about making one immediate addition to the lunchtime offerings.

“I can’t believe there wasn’t a buffalo chicken sandwich! What kind of sandwich shop doesn’t have a buffalo chicken?” Scouten asked rhetorically, proudly stating that Tatro’s will now be offering the “Buffawow” – a panini consisting of diced chicken, Frank’s Red Hot sauce, lettuce and ranch dressing.

Scouten insisted the Buffawow has to be made with Frank’s Red Hot sauce and the pulled pork will be cooked in Sweet Baby Ray’s barbeque sauce. He wants customers to know the high caliber they expect from Tatro’s will be unchanged.

“I believe in quality,” he said. “If I wouldn’t eat it, I’m not going to serve it. We’re going to use the same vendors where we can and always choose name-brand over generic.”

Scouten, who has decades of restaurant experience which includes stints at Vermont National Country Club and the Windjammer, says one offering he hopes to expand is the variety of soups on his menu. The restaurant will also offer unique specialty sandwiches each day and will continue to offer baked goods.

Once the various inspections are completed and the kitchen is stocked, Scouten hopes to be serving the downtown St. Albans workforce and the community at large within the next week or so. To begin, the deli will be open 9 AM to 6 PM on weekdays and 10 AM to 3 PM on Saturdays.

Though he’s still in the process of setting up a new website and social media pages, Scouten says he’s confident that the same community support which has kept a steady line at Tatro’s for more than a decade will let people know when they can once again grab their favorite sandwiches.

“Good old word-of-mouth,” Scouten said when asked about his primary advertising strategy for now. “We thought about it as a golden opportunity and it is- This area needs this deli.”