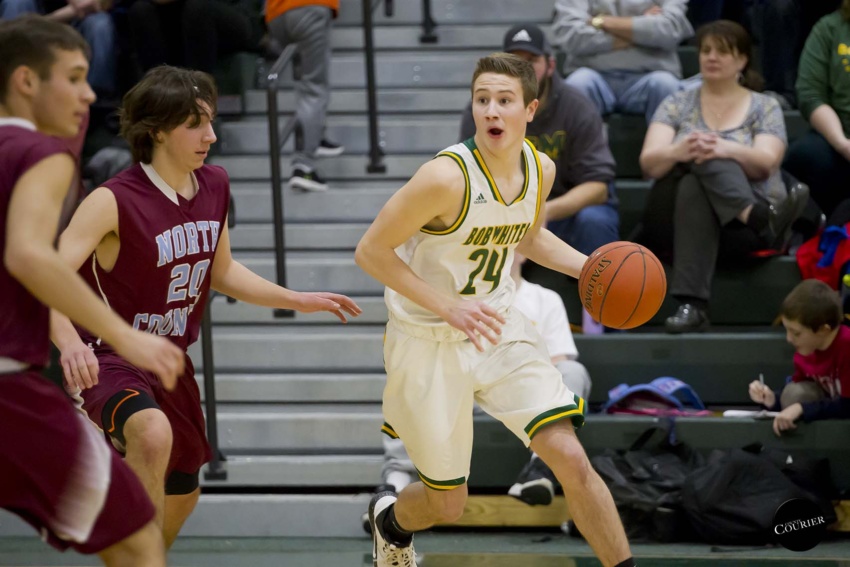 ST. ALBANS – It would have been tough to guess around the time Taylor Yates hit his fifth straight three-pointer to give BFA-St. Albans an early 14-point lead on North Country that his surreal performance would need to be topped. But after a Bobwhite lead which had been as high as 18 points went away in the second half on Wednesday, it took a game-winning three from birthday-boy Kam Dunsmore with 30 seconds left to push BFA to a 60-57 win over the Falcons.

The same North Country (11-3) team which had beaten BFA (7-7) by seven points in Newport a month ago rallied from nearly 20 points down in the first half to hold a one-point lead with 1:27 left in the fourth quarter. Having long ago watched North Country devote enough attention to Yates to slow his otherworldly start, BFA had a reliable option in Dunsmore, who broke a 55-55 tie with a three in front of the Bobwhite bench less than an hour after the home crowd had serenaded him with an enthusiastic rendition of “Happy Birthday” at halftime.

“North Country did a good job of shutting Yates down after he had that really hot start,” said BFA coach Matt Toof. “We needed somebody to step up in that second role and Kam has done it throughout the year.”

Yates, who finished with a game-high 23 points was the perfect player on Wednesday. His fourth straight three had given BFA a 14-0 lead midway through the first quarter and he hit his fifth attempt as well to give his Bobwhites a 23-9 lead in the second. When the Falcons threw everything they had at him, Yates didn’t force bad shots – he just found open teammates.

“I’m really confident in my team,” said Yates, who finished 6-8 from beyond the arc. “Especially Nick (Voyer) and Kam, Kam can do everything – inside and outside, and Nick s really big inside. I’m fine with them if they take all the shots the whole game.”

Dunsmore, who wasn’t far behind Yates with 19 points on Wednesday, sealed the game for BFA with a pair of high-pressure free-throws to extend the Bobwhite lead to 60-57 after his three had been countered by a Falcon basket.

His free-throws may have presented a higher level of difficulty, but it will be the three-pointer Dunsmore hit prior to that which will be the lasting memory from Wednesday’s man-of-the-day.

“That three he hit down here, man, it was a birthday three,” Toof said. “I say it all the time, he plays great on defense too. He’s just a force on both ends.”

BFA rushed out to Wednesday’s lead thanks to phenomenal play from its entire lineup. Voyer was dominant on the boards and Noah Earl finished a pair of quick lay-ups to crush the North Country press in the second quarter. But the early spotlight Wednesday was stolen by Yates, who admitted he had special motivation to begin strong against North Country.

“I know last game my brother outscored me,” Yates said with a smile. “So I was told that this game I can’t have that happen again and I came out firing and it felt good.”

“I just sit down and enjoy the show. I’m his biggest cheerleader when that goes on,” Toof said of Yates. “When he’s on, man, it’s fun.”

For the record, sophomore Charlie Yates finished with just two points on Wednesday, 21 behind his brother, but was a vital part of the Bobwhite game at both ends. His lone basket was a difficult lay-up late in the fourth quarter which ended a 5-0 North Country run and helped BFA gather itself enough to eke out the win. The younger Yates was as crucial a two-way player in the second half Wednesday as anyone.

After being down as much as 29-11 in the second quarter, North Country rallied a bit to shorten BFA’s halftime lead to 34-22. By the end of the third quarter, the Bobwhites were ahead 48-39. Brett Roy, who scored a team-high 17 points for North Country, scored his team’s first seven points of the fourth quarter to help bring his team within six points with six minutes to play. Consecutive Falcon threes and a lay-up knotted the score at 54-54 with 1:45 left.

When North Country hit a free-throw to take a one-point lead with 1:27 left, nearly 50 seconds ran off the clock before the elder Yates hit a foul-shot of his own to even the score at 55-55. Yates’ second free-throw attempt missed but Dunsmore grabbed the rebound and drew a foul. Yates inbounded the ball and found Dunsmore in front of the Bobwhite bench for the clinching three.

Both Dunsmore and Toof used the same phrasing to describe what enabled BFA to overcome the disappointment of a 19-point swing and pull out the win in the final seconds.

“It was just composure,” Dunsmore said. “We know that we’re a better team overall so we just needed to keep our composure and we knew we’d come out on top.”

“That’s been our biggest growth is that mental toughness and composure,” Toof added. “That’s been our word all year, we’ve got to stay composed. We did that tonight and that attributed to our win.”

Voyer finished with six points for BFA and Earl tallied five. Logan Keelty, Charlie Yates and Case Ballard each scored two points for the Bobwhites, who will play four straight road games beginning with a trip to Enosburg on Saturday.

Toof says Wednesday offered a good lesson about staying motivated through the finish line as it prepares for games against an Enosburg team it beat by 40 points in January before facing winless Vergennes.

“We can’t let our foot off the pedal,” Toof said. “Tonight is the perfect example. Things felt good for awhile and then it fell hard. We’ve just got to get better in practice every day.”