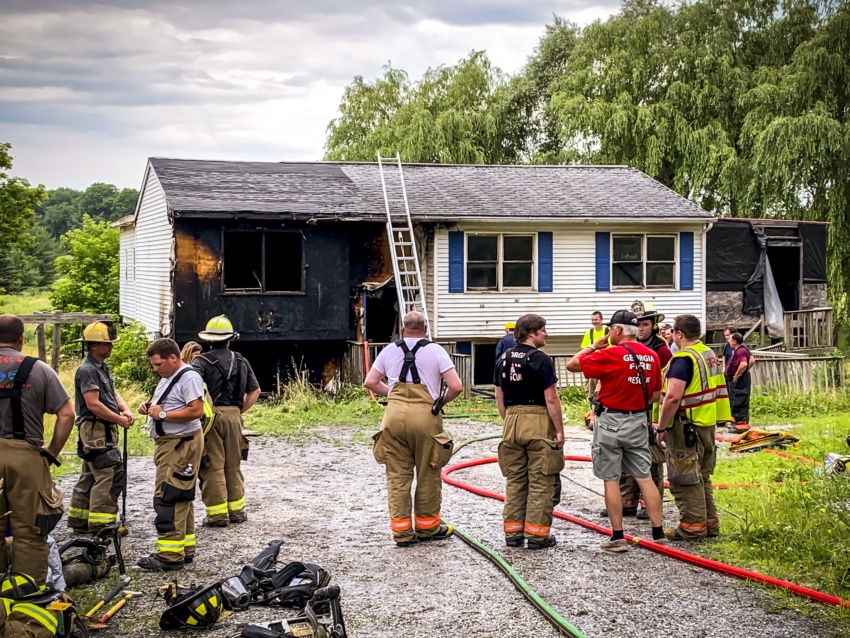 Firefighters take a few minutes to rest Thursday afternoon after extinguishing a house fire just off Route 7 in Georgia. According to Georgia Fire Chief Keith Baker, the fire is being investigated by members of the State Police Fire and Arson Investigation team. Rachel N. Lamoureux, County Courier

GEORGIA: A quick response from the Georgia Fire Department helped get a quick knockdown on a house fire in Georgia on Thursday afternoon.

The call went out at just before 1 pm, and according to the Fire Chief, the first truck to arrive on the scene arrived virtually simultaneously with when the fire was reported.

By coincidence, Georgia Fire Chief Keith Baker saw the smoke from his home not far away. He decided to go see what was burning. Just about the same time, the Town’s main Engine was leaving the station for service, which is just a few hundred feet from the scene of the fire.

Chief Baker’s father, Malcom, a former Chief of the Department, was behind the wheel of that truck, and was able to respond right off.

Chief Keith Baker and his son, who also happens to be a member of the Georgia Fire Department, arrived at the scene to call the fire in to dispatch and get more troops on the way.

Fire appears to have started in the basement of the raised ranch, according to Chief Keith Baker, and although there was nobody on the scene when the Baker trio arrived, the Fire Department did search the building to ensure that nobody was trapped inside the structure.

Nobody was found inside, and the building appeared to be vacant, according to Chief Baker. The Vermont State Police fire investigators are on the scene this afternoon, working to determine the origin and cause of the fire.

Firefighters from Milton, St. Albans Town, and St. Albans City also responded to the scene to assist Georgia. A significant need to help was caused by the summer heat and possibility of heat exhaustion, according to Chief Baker.

No injuries were reported as a result of the blaze.