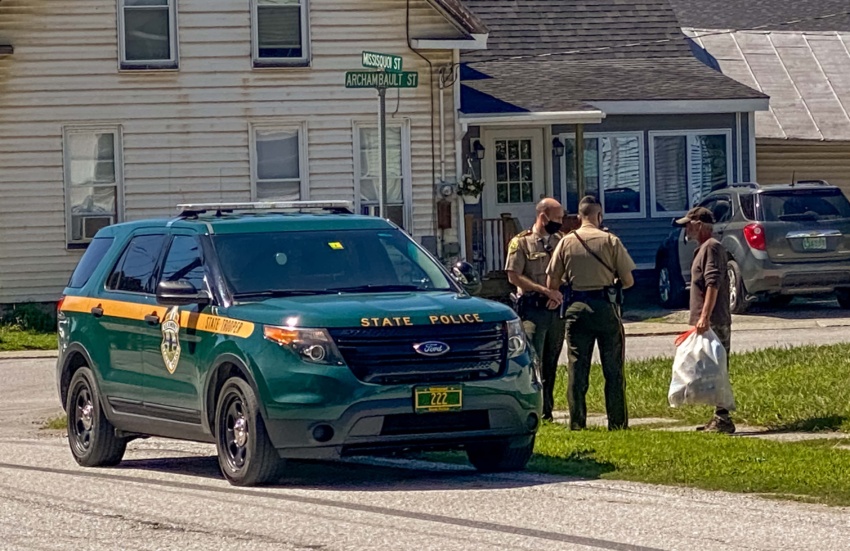 Update: This news story was updated after police identified the subject.

ENOSBURG FALLS: Vermont State Police began looking for a man that was believed to have stolen two bags of returnables from a home on Missisquoi Street in Enosburg late Friday morning.

A press release requesting information was sent to news media around 12:30 pm, asking for the public’s help to locate the suspect.

After reading the initial article, published online by the County Courier, published within an hour of the initial release, a local resident in Enosburg Falls identified a man that matched the photo in the news story, calling police to give them a tip on the man’s location. That was a little after 1:30 pm, according to sources.

Police responded to the area, but by the time police arrived, the suspect had returned to the same home on Missisquoi Street to steal a third bag of returnables and had walked about 1/10th of a mile back toward Main Street when police arrived. By that point, the caller had followed the man back to the scene of the crime, where he could be seen stealing a third bag of returnables.

The bags of returnables were not visible from the curb when they were stolen.

That man, who police later identified as 50 year-old Jeffrey Fleury, told police that he was down on his luck and that he had stolen the cans for change to get by, according to one of the officers.

The third bag of returnables, which Fleury had in his hands when police confronted him, was confiscated and returned to the homeowner moments later.

Fleury was issued a citation to appear in Criminal Court to answer to the charge of petit larceny. He was also given referral information to local Social Service agencies for help.