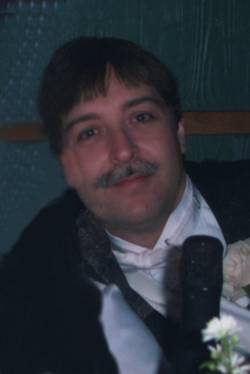 God sees when the footsteps all falter and when the pathway has grown too steep. Then he touches the weary eyelids and gives his dear ones sleep.

Dicky went to sleep with loved ones at his side after a long battle with MS. In heaven he dwells. He loved fishing, hunting and camping. Dick’s drink of choice was Budweiser and he also enjoyed loud music. He always knew the right song to play and he had a laugh that fills your heart. He was a lover of animals and really enjoyed his dog, Sam. He also loved to draw and enjoyed nature.

He was employed at Fonda and IBM; and also worked and lived on a farm in his younger years.

A sincere thank you to Franklin County Home Health Hospice, Dr. Michael Corrigan, Stacey Bouchard NP, his neighbors and friends at Four Winds, NMC OBGYN for their support, and Price Chopper Pharmacy. Also, all family and friends that have been there with their support.

Services will be held at the Heald Funeral Home at 11:00 AM, Saturday, September 19, 2020, followed by burial at Mount Calvary Cemetery. There will be a gathering following services at 3 Victoria Lane.

To send Richard’s family a message of condolence or share a memory, kindly go to his online guest book at www.healdfuneralhome.com.