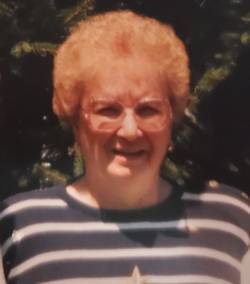 ST. ALBANS: Laurice Fay Turnbull Skelton, a long-time area resident passed away from a sudden illness, at the age of 81, on Thursday, March 25th, 2021, at her home with her family by her side.

She was born June 16th, 1939 in St. Albans, to the late Bernard Turnbull and Ethel (Chamberlain) Turnbull.

She attended St. Mary’s Catholic School in St. Albans through her sophomore year of high school at which time she transferred to Bellows Free Academy St. Albans graduating in 1957. On September 17th, 1960, Laurice married the love of her life, Garrie R. Skelton at St. Mary’s Catholic Church. After eight years of being a U.S. Air Force spouse, Laurice and Garrie returned to St. Albans where they raised a family.

Laurice was a lifetime member of the Catholic Daughters of America, sang in the St. Mary’s Church Choir, was a Lector at St. Mary’s, and was a long-time member of the Franklin County Grange. Over the years she was employed at several local businesses and volunteered at the St. Albans City School library. She enjoyed spending time with family and friends and loved hosting an annual Christmas party at her home.

Laurice is survived by her son, Timothy A. Skelton, and his wife Jennifer J. Skelton of Newport, Vt. Her grandchildren: Tiffany (Skelton) Burnor and her husband Adam Burnor of St. Albans, Devon (Skelton) McKinsey and her husband Stewart McKinsey of Newport, Brenden Skelton and his significant other Hannah Pierce of Claremont, NH, Emily Skelton and her significant other Shane Potts of Opa Locka, FL. Her great-grandchildren Peyton, Finley, Cameron, Tyler, and Greyson. She is also survived by Christi Skelton (the widow of Brian Skelton), and her sister, Cheryl Belrose.

Laurice was preceded in death by her parents Bernard and Ethel Turnbull, Garrie Skelton her husband of 60 years, son Brian Skelton, and sisters Donna Davies, Barbra Lumbra, and Rhea Berthiaume.

A Mass of Christian Burial will be celebrated on Thursday, April 8th, at 11:00 AM at St. Mary’s Catholic Church, 45 Fairfield Street, St. Albans with the Reverend Father Kevin Chalifoux as celebrant. Prayers of committal will follow at Holy Cross Cemetery, Fairfax Street, St. Albans.

Those planning an expression of sympathy are asked to consider the UVM Cancer Center, c/o University of Vermont Foundation, Courtyard at Given – 3N, 111 Colchester Avenue, Burlington, Vermont 05401.

Laurice’s funeral arrangements and final wishes are in the care of the Heald Funeral Home, where messages of condolence or sharing of memories are welcome at www.healdfuneralhome.com.