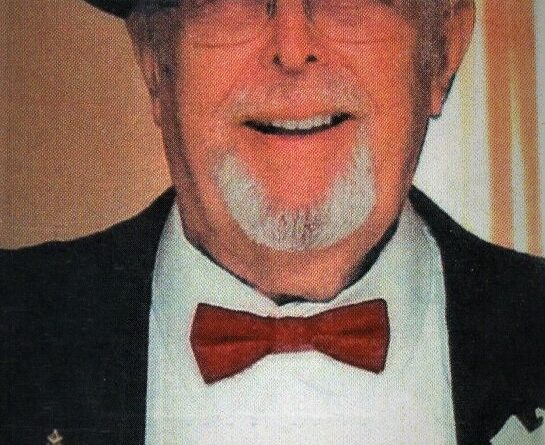 On Monday, May 31st, one of the last of the “Great Generation” passed away peacefully in his home in Richford, surrounded by his family. M. Hayden Janes was born on September 15, 1925, in Richford, to Donald and Olive (Hayden) Janes. On June 22, 1949, he married the love of his life Mavis Jeanne Bashaw of Richford.

Hayden’s youth was spent alongside his brother and partner in crime Quentin, and when they weren’t spending their time at the family store on the corner of Town House Hill they were thinking up various shenanigans. One adventure was buying round trip train tickets to Newport, staying overnight and failing to tell their very concerned mother.

Even though Hayden was probably too young to drive, he regularly chauffeured Dr. Lawliss, Father Barrat and Herbert Comings in their cars. Later this evolved into his own taxi service between Richford and St. Albans.

Upon graduation from Richford High School in 1943, Hayden found work at the Canadian Pacific Railway office located in Richford. After retirement from the railroad, he started his own real estate business. He cared deeply for his community and family which were many times, intertwined. He made sure his children and grandchildren, who called him “Bubba” knew the history of their family and their town as well.

Public service was important and Hayden was a proud member of many organizations including and not limited to, Village Trustee and Auditor, Town Fire Warden, REAC Board Director, Incorporator for Northwest Medical Center, and the Richford Historical Society and remained a justice of the peace until he passed away.

He followed in his father’s footsteps and became a member of the volunteer fire department where he served for over 70 years. In 1999 the Vermont State Firefighters Association recognized him as senior Firefighter of the Year. He proudly accepted the award even though it was presented to him by Gov. Howard Dean, a democrat. At one point in his life, Hayden thought he might move, however, after being reminded that he would no longer be able to vote in Richford, he quickly changed his mind.

He was a member of both the Richford and Orange City, Florida Lions Clubs and was chosen to receive the Melvin Jones Fellow Award for dedicated humanitarian service. For 74 years, Hayden was a Freemason and for 36 years a member of the Mt. Sinai Shriners.

Faith was important to Hayden and he was a lifetime member of the First Baptist Church of Richford. In the last few years he also found fellowship at the Franklin United Church with Pastor McConnell. As his grandson stated in his eulogy, in Hayden’s tenure as Justice of the Peace, he performed countless marriages including four of his grandchildren. “When we arrived on his doorstep with license in hand, he asked us two questions before marrying us, do you love each other and do you believe in a higher power? He said if we loved each other and believed in God he could approve our union.”

Hayden had a passion for cars and became a member of Vermont Automobile Enthusiasts, looking forward to the annual Stowe Car Show. His favorite was his 1926 Packard first owned by his grandfather Chauncy Hayden. “Haddie,” as the car was named, appeared yearly at the annual Fourth of July celebration, when he wasn’t driving the old Graham fire truck. He purchased a Cadillac just in time to participate in the Guiness Book of Records Longest Cadillac Parade held in Orleans County.

Hayden was proud of his three daughters, Susan, Connie, and Heather and spent many summers at their camp at Lake Carmi teaching them the art of making campfires and roasting hot dogs. When they lived above the store, he could be seen marching the girls out on the roof of the building practicing fire drills.

A scripture read at his funeral, held last Wednesday at the First Baptist Church, says “Joy cometh in the morning” and after a long wait Hayden, with a twinkle in his eye and a wink is meeting the new day alongside the love of his life, Mavis.

Calling hours were held on June 2nd at the Goss-Spears Life Celebration Home. The funeral was held at the First Baptist Church in Richford on June 3rd. On June 4th a private burial service was held at Hillside Cemetery.