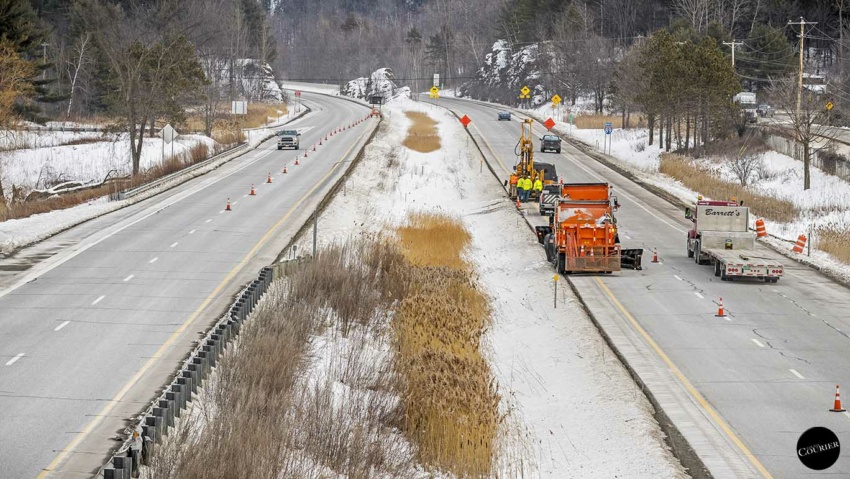 GEORGIA: One of the two northbound lanes of Interstate 89 in Georgia are being closed down late this afternoon after workers from the Agency of Transportation discovered a large sinkhole under the roadway earlier this week.

According to VTRANS spokesperson Amy Tatko, Transportation officials have been keeping an eye on the site where a 600′ long, concrete culvert traverses the interstate, just north of the Route 7 on and off ramps.

Tatko said in a telephone interview with the County Courier on Friday afternoon, that workers have been monitoring the washout for several days, filling in the hole with crushed rock as it became visible.

The hole is 16 feet below the surface of the right tire track of the right lane of the interstate, said Tatko, and the hole itself is about 10 feet deep.

Monitoring the area throughout the night, VTRANS workers saw the roadway begin to sag Thursday night and Friday morning, prompting the agency to take Emergency action.

“Workers have been probing, coring, and monitoring all day,” Tatko said.

This work was being done as the left lane of the Interstate was closed to give workers the appropriate room to work safely and evaluate the integrity of the remainder of the highway. That left all northbound traffic trekking over a known void a story and a half below grade.

“At this point, the left lane looks stable, and we don’t anticipate having to close it,” Tatko said, “At least for now.”

That’s because the soil is saturated with moisture, and workers are evaluating how the base of the remaining left lane holds up. Tatko said workers will be monitoring the remainder of the roadway, including the left lane of northbound traffic, and both southbound lanes for any safety issues.

Officials are holding off on closing down the right lane of travel until after the Friday evening commute, according to Tatko. Best estimates for the closure are set for about 6 pm this evening.

In addition to the most major hole that is causing the closure, Tatko said there are two additional holes that workers have found under the highway. VTRANS continues to monitor those to determine if a full closure will be required.

S.D. Ireland has been contacted to do a repair, and possibly a partial replacement of the damaged part of the concrete culvert, according to Tatko. They are the same construction company that worked through the night and bad weather to rebuild damage to the southbound exit about 700 feet away after the Halloween storm damaged that part of the roadway.

Tatko said the same storm was the cause of this damage, and it’s been a known issue since November. The extent of damage was only recently discovered however and was probably getting worse every day since the storm happened 84 days ago.

“Safety is always our top priority,” said VTRANS Chief Engineer Wayne Symonds, “The decision to close a lane of the interstate is taken very seriously and made with input from our top engineers in our Highway Division.”

The County Courier was the first to report this story and will have more information as it becomes available. Follow our Facebook page for more local news that matters to you.