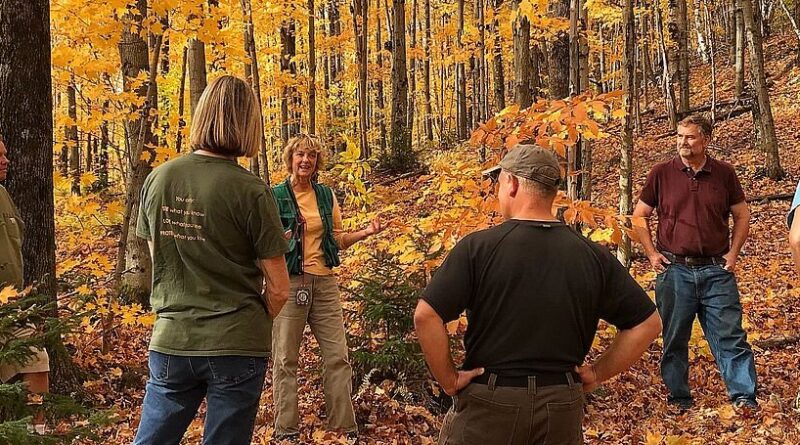 Nancy Patch, Franklin/Grand Isle County Forester for the Vermont Department of Forests, Parks, and Recreation and Vice-Chair and Co-Founder of the conservation organization Cold Hollow to Canada, is the recipient of the 2021 Arthur Gibb Award for Individual Leadership.

The Vermont Natural Resources Council (VNRC) presents this honor annually to a Vermont resident who has made a lasting contribution to their community, region or state in the ways they integrate smart growth and conservation. The Arthur Gibb Award will be presented to Patch at VNRC’s 2021 Annual Meeting, to be held virtually on Thursday, September 23. Find more information at vnrc.org/annual-meeting.

Originally from Enosburgh, Patch has made a career and life of working with forestland owners and communities around northwestern Vermont, first as a consulting forester, then as Franklin/Grand Isle County Forester for the State of Vermont, and most recently as the driving force behind Cold Hollow to Canada (CHC), a regional conservation partnership in the northern Green Mountains that has permanently conserved 6,000 acres of forestland since its inception in 2008.

CHC works to achieve a healthy and intact forested landscape that supports a strong and sustainable local economy through stewardship, with the protection of core wildlife habitat and connectivity across the entire Northern Forest. CHC’s work includes equipping communities with the tools, knowledge, and resources to advance forest resiliency.

In the early days of the organization, Patch spearheaded a partnership between CHC and VNRC that assisted three towns in revising their Town Plan and Zoning Bylaws, creating or strengthening conservation districts, and establishing language around core forest block and wildlife connectivity protection.

“While [Patch’s work] might seem common now, this was all before the passage of Act 171,” said Charlie Hancock, a forester and Board Chair of CHC, referring to legislation passed in 2016 that requires towns and regional planning commissions to explicitly address the fragmentation of intact forests and wildlife habitat when planning development. (Hancock nominated Patch for this award before becoming a member of VNRC’s Board of Directors in 2020.)

“Ahead of her time, Nancy had the vision to realize that local planning and zoning were critical tools to help our communities encourage growth in a manner that protects the resources that define the place we call home. Since then, a number of other towns in our area have looked to this work as a model for their own town plan and bylaw revisions,” said Hancock of Patch’s positive influence.

“Nancy understands that promoting smart growth requires more than planning for compact centers and viable downtowns. It also involves maintaining the rural economy, working lands, and natural areas that surround those centers, and recognizing the value of land use planning to maintain the ecological integrity of our forests,” explained Brian Shupe, Executive Director of VNRC.

Ward Heneveld of Enosburg Falls said that Patch’s dedication to conserving northern Vermont’s forests has rubbed off on him in the 20-plus years he has known Patch as a neighbor, friend, forester, and conservation leader. He said Patch has been an inspiration and guide for the management of his own forested land, which he and his wife Cheryl conserved at Patch’s encouragement. Heneveld was an early CHC board member.

Both Heneveld and Hancock spoke admirably of Patch’s advocacy and leadership behind the formation of the Enosburgh Conservation Commission in 1997, which inspired three other towns in Franklin County to follow suit. Enosburgh now has a Conservation Fund that is instrumental to funding conservation projects in the town’s yearly budget.

“Nancy’s comprehensive knowledge of not only silviculture and forestry practices, but ecology, soils, hydrology, and wildlife biology come through in every CHC meeting and on every forest walk. Nancy gives landowners a powerful and true understanding of the interconnected landscape and how important it is to our health, security, and wellbeing,” said Everett McGinley, Treasurer of CHC, who is among those who nominated Patch for this award.

The organization’s Woodlots Program brings regional landowners together to build a common vision of stewardship to maintain healthy forests that are preserved for wildlife movement and resilient to climate change. “Landowners may begin their association with CHC with very different economic and social priorities and perspectives, but through the course of the program they come to a common point of understanding and mutual action,” said McGinley, a technology entrepreneur and forestland owner in Montgomery, VT.

“Nancy’s dedication to educating and engaging landowners, who are at the forefront of the decisions affecting our forests, is part of what has allowed her to make such a long-lasting and meaningful impact on the health of our forests and communities,” said Jamey Fidel, Forest and Wildlife Program Director at VNRC.

“Nancy has been out front advancing the work that will keep our forests intact and functional for future generations,” said Hancock.

“Nancy’s energy, clarity of vision and purpose, and ability to bring disparate groups together and motivate them to work to preserve our environment are exemplary,” echoed McGinley.

“I and many others are in awe at and appreciate Nancy’s steadfastness to protect the future of Vermont’s forested landscape throughout her career,” added Heneveld.

The Arthur Gibb Award for Individual Leadership was established by Smart Growth Vermont in 2006 in honor of the late Arthur “Art” Gibb, who was first elected to the Vermont Legislature in 1962. Gibb played a major role in passing key environmental and land use legislation that includes banning billboards, enacting Vermont’s bottle deposit law, regulating junkyards, and modernizing statutes governing local and regional planning.

Gibb was on the commission that laid the groundwork for Act 250 and served twelve years on the Vermont Environmental Board, including one as Chair. Smart Growth Vermont merged with VNRC in 2011. To learn more about the Arthur Gibb Award, visit vnrc.org/awards. 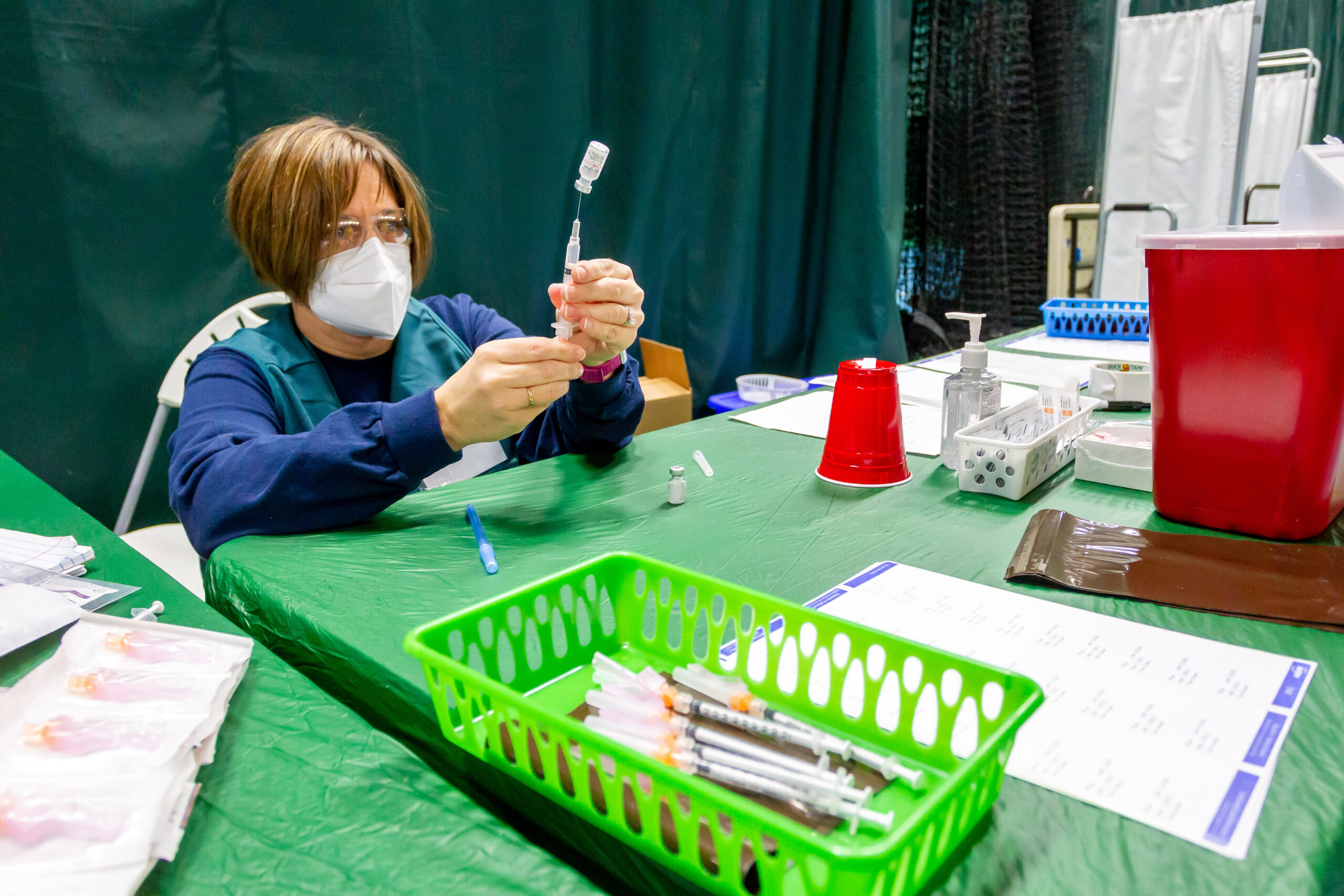 VERMONT HAS EXTRA VACCINE APPOINTMENTS, HERE’S HOW TO GET ONE SOONER THAN YOU MAY HAVE THOUGHT