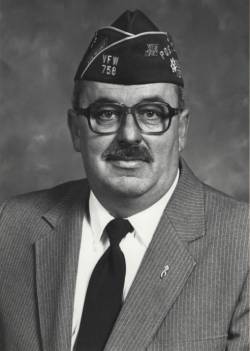 Saint Alban: Frederick Joseph McMahon, Sr. a longtime area resident passed away at his home on Thursday, June 4, 2020, with his wife, Diane at his side.

On April 14, 1973, at Holy Angels Church, Fred married Diane Bushey, who survives him.

Fred entered the United States Marine Corps in June of 1971 and received his honorable discharge as a Lance Corporal in March of 1973. He remained in the Marine Corps Reserve until February of 1977.

Fred came back to Vermont and received his GED from Bellows Free Academy in Fairfax. He was a 36-year associate with Moore Lincoln-Mercury dealership. Fred was very active with the local Veterans’ groups, including the Robert E. Glidden Post# 758, Veterans of Foreign Wars, Green Mountain Post # 1, American Legion, Disabled American Veterans Association, Vietnam Veterans Association, and the Marine Corps League.

Fred was instrumental in the formation and first commander of the Franklin County Vermont Honors Detail which provides taps and firing party at many gatherings and for deceased Veterans’ funerals.

He was an avid hunter, was involved with Toys for Tots, and for 40 years he played Santa at the VFW, Redstone Villa, Holiday House Adult Care, and Four Winds Senior Housing.

Survivors include his wife of 47 years, Diane of St. Albans; his children, Frederick J. McMahon, Jr. and his wife, April, and their son, Emery of St. Albans, and Heidi Guilmette and her husband, Daniel, and children, Mikayla and Rebecca Gabree and Dylon Guilmette, and a great-grandson, Kayden James.

Fred is also survived by his brother, Richard McMahon and his wife, Ruth, of Winooski and sister, Catherine Desorcie of St. Albans, as well as several nieces and nephews.

In addition to his mother, Alice, Fred was predeceased by his brothers, Roger, Charlie and Sonny, and his sisters, Lillian and Marilyn.

Fred’s family will receive friends on Thursday, June 11, 2020, from 1:00 to 3:00 PM at the Heald Funeral Home, 87 South Main Street, St. Albans with a service following at 3:00 PM. Military honors and prayers of committal will follow at Holy Cross Cemetery.

Due to the COVID – 19 virus, the Vermont protocol for social distancing will be observed, attendees are asked to wear a face mask, and please follow instructions from the funeral home staff.

To send Fred’s family a message of condolence or share a memory, kindly go to his online guestbook at www.healdfuneralhome.com.