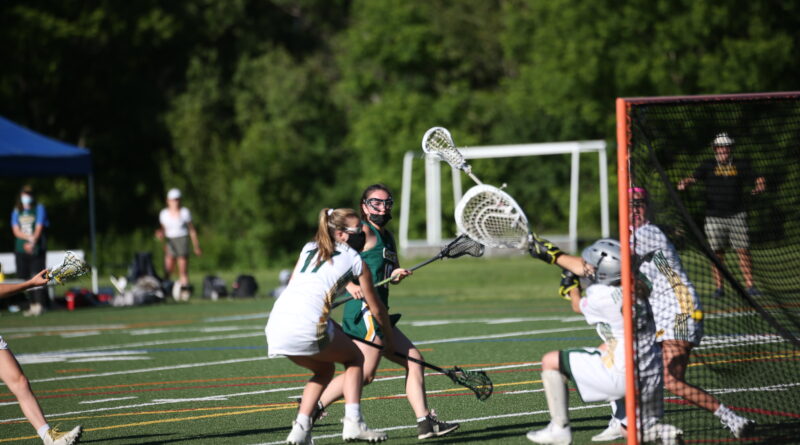 MANCHESTER – Both teams followed the script early on in Thursday’s Division I girls lacrosse semifinal. Unbeaten top-seed Burr & Burton Academy was dominant and No. 4 BFA-St. Albans looked like a team which had hit its peak a game ago and was ready to bow out. The problem for the favorites was that this Comet team thrives against adversity, and they’re making sure the rest of the state learns that lesson one playoff comeback at a time.

“I feel like we’re definitely a second-half team,” said BFA freshman Caroline Bliss, who scored the game-winner in the Comets’ 11-9 upset of the Bulldogs. “I didn’t think we were slow to start, I knew we just weren’t all the way there yet. But I knew we were going to come, I knew the Comets were coming, I just knew it.”

The Comets (12-3) were coming, indeed. Down 4-1 in the first 10 minutes and 6-2 after 20 in the first half, BFA bounced back just as it had against a five-goal deficit late in its overtime triumph in the quarterfinal against CVU. Bliss’ four goals and 17 astonishing saves from Ayla Shea were the keys in sending BFA to its first ever Division I championship game. The Comets have only ever played in one final, losing in the 2012 Division II championship to Rice. They’ll look for a first program crown against No. 2 South Burlington at a time and location still TBA.

Bliss assisted a Sophie Zemianek goal, just over six minutes in, to answer a pair of goals by the Bulldogs (16-1) to open the game. When Adelaide Hughes put in the rebound of Loghan Hughes’ free-position shot five minutes later, it served mostly to stop the bleeding and cut Burr & Burton’s lead to 6-2. From there, BFA got stronger. Loghan Hughes put in the rebound of a Kayleigh Branon shot, Bliss scored after a patient pass from Loghan Hughes then scored again with a nifty backhanded shot off another Loghan Hughes pass to send BFA into halftime down just 7-5.

The second half could have turned ugly early. Loghan Hughes had a good shot saved off the opening faceoff then the Bulldogs scored at the other end to push the lead to 8-5. Zemianek assisted a Loghan Hughes goal to get the Comets back on track then Adelaide Hughes stole the ball in her own end, carried it ahead and assisted Bliss to get the score to 8-7 with just over four minutes gone in the second half. Zemianek had the game’s next tally, waiting for the right look off a free-position start to knot the score at 8-8 with 7:31 gone in the half.

Burr & Burton’s Sadie Stefanak scored the last of her game-high five goals to get the Bulldogs back ahead, 9-8, with just over 15 minutes to go. Without the heroics of Shea, that might have been the game’s last turning point. With 14 minutes on the clock, Shea was facing a Bulldog her goal and the Bulldog attacker behind it lifted a pass to a wide open teammate. Shea turned around and used a full-out dive to block the shot. Loghan Hughes scored a few minutes later to make it a 9-9 game.

“I don’t even know, it was just instinct at that point,” Shea said of the showstopping save. “I play soccer, that might be some of it. But I know that’s the kind of goal that just makes or breaks the game. Putting your body out there like that is kind of what I signed up for when I chose this position, so if I’m not going to make those saves for the team when they’re out there doing all they can I’m not doing my job.”

“She just kind of got on fire. I think Ayla, when she gets stressed just gets better, it just increases her focus. So the more that she gets pressured or the more they’re shooting at her, the better she gets.”

Knotted up thanks to Shea and Hughes, BFA was ready to complete the comeback. Zemianek found Bliss just left of the Bulldog goal and a perfect shot gave BFA a 10-9 advantage, its first lead of the day, with 8:22 remaining. The Comets tried to hold the ball but Burr & Burton wasn’t the top seed for no reason – they made the final stretch miserable for BFA. Joined by every player who could make it back and, of course, Shea, the Comet defense shone brightest as the Bulldogs launched late attacks. Margot Collins, Chiara Skeels, Rachel Needleman and Sydney Heth had been strong in the back all day and were strong as ever when BFA needed them most.

With the ball in hand and seven minutes still to go, the Hughes’ combo connected on a brilliant insurance goal. BFA was clearly hoping to just hold the ball as long as it could, but Burr & Burton left Adelaide so open in front of the net it would have been foolish for Loghan not to pass to her. That’s just what happened and Adelaide put a shot away to give BFA a little breathing room.

“That was smart,” Pipes said. “Being smart with the ball is something we talk about all the time.”

Not to say the final 6:44 was without worry – it was essentially one long heart attack for the many BFA fans who made the nearly three-hour trip to Manchester – but a two-goal lead in that timespan is a world away from a one-goal lead. Besides, BFA plays its best as the game goes on.

“It’s happened before,” Shea said of her team’s penchant for needing a comeback. “We’ve been down but I know if I’m playing my game and playing as hard as I can, and making the saves when I need to, that the girls will pick it up.”

After trailing by five late to CVU and for most of Thursday’s game against Burr & Burton, the Comets were pretty adamant that they’d prefer to not need another big comeback when they face a powerful South Burlington team in the championship game.

“No, we will not do that against South Burlington. I didn’t want to do it here,” Pipes said with a smile.

Asked if BFA was going to continue to be a second-half team against the Wolves, Bliss answered quickly and efficiently.

There are some scheduling issues still to be worked out to know when BFA and South Burlington will square off for the Division I title. The Comets and Wolves have not played each other this season.