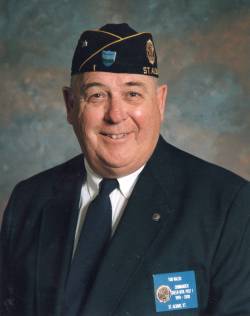 Tom graduated from St. Mary’s High School and he then entered the United States Army receiving his honorable discharge in 1952, with the rank of Corporal and received the Army of Occupation Medal.

Tom worked many years for the former Central Vermont Railroad. He then went on to work five years for the Vermont Department of Corrections. He retired as station master for Amtrak in St Albans.  Tom was a former Commander of Green Mountain Post # 1, American Legion, and life member, Robert E. Glidden Post # 758, Veterans of Foreign Wars and St. Albans Lodge 1566, B.P.O.E.

Besides keeping his ten kids in order, he lent a firm guiding hand to the 40 something neighborhood kids around our house. We all remember our trips to the “lot” at the lake, with as many kids as he could stuff in the car.

Tom had several families towards the end of his life. Our family would like to thank his Legion family who gave him comfort, conversation and a place to go after the passing of our mother. His Jeff’s Restaurant family, who dealt with his every whim and request without complaining, and his Peoples Trust family always willing to lend a chair and an ear.

His daily routine was getting on his computer and keeping his friend, the Mayor, in line; hopping in his car for his morning rounds to Jeff’s and the bank. After his afternoon nap he was back in his car headed to Hathaway Point on the Lake for his newspaper and summer visits to family camps. The Legion was his last stop of the day.

Survivors include his sons and their wives, Timothy and Robin, Daniel and Susan, Stephen and Beth, Patrick and Tareyn, Michael and Shelly, Andrew and Chandra, and Thomas and Barbara; his daughters and their husbands, Peggy and Craig Jehle, Lucy and Timothy Hurlbut, Katie Walsh and Norm Zawisza, as well as his many grandchildren and great-grandchildren.

In addition to his parents and wife, Patty, Tom was predeceased by his brother, Robert Walsh and sister Eleanor Walsh O’Brien.

A graveside service and military honors will be held on Wednesday June 9th, 2021, at 12:30 PM at the family lot in Holy Cross Cemetery, Fairfax Street, St. Albans.

In lieu of flowers, memorials in Tom’s name may be made to the Franklin County Home Health Agency, 3 Home Health Circle, St. Albans, Vermont 05478.

Honored to be serving the Walsh family is the Heald Funeral Home, where messages of condolence are welcome at www.healdfuneralhome.com.