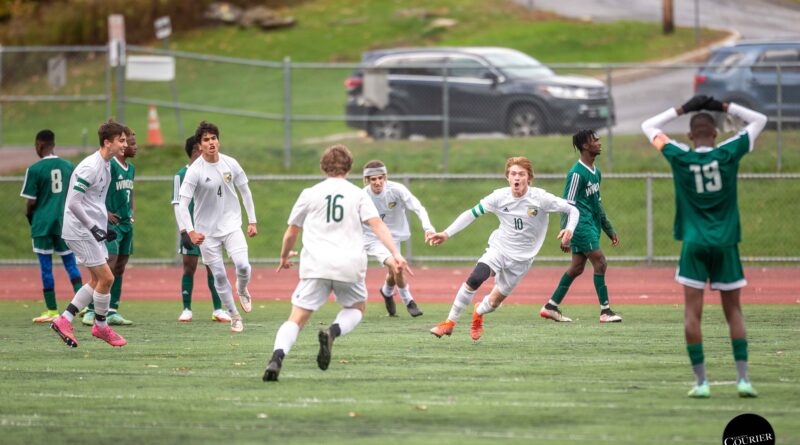 BURLINGTON – In a matchup surrounded by a bit of a circus atmosphere following a controversial September meeting between Enosburg and Winooski’s soccer programs, Tuesday’s Division III semifinal came down to nothing more than 80 minutes of soccer between two immensely talented teams.

In the end, Levi Webb took hold of the Enosburg career goals record by scoring twice to give the No. 3 Hornets a 2-0 lead, Winooski erased that lead, and Foster Hutchins punched in a game-winner from a Webb assist to give Enosburg a 3-2 win over the No. 2 Spartans. Enosburg will return to the Division III championship game for the first time since winning its only outright title in 2006.

“I’m so excited right now, I’m so relieved,” said Hutchins, a senior who will look to close his career Saturday at Hartford against top-seeded Green Mountain. “We really deserve this, we’ve had a great season.”

“Outstanding effort from our guys against a really talented team,” said Hornet coach Randy Swainbank. “We knew, we’ve played them a number of times and we talked last night – if we were to get up a goal or two, they’re not going to quit, they’re going to keep coming, which is exactly what they did. When they tied it at two, I thought we were in some serious trouble honestly. But our guys just stepped up.”

After the regular-season meeting between EFHS (15-1) and Winooski (12-2) was followed with accusations from the Spartan players of racial abuse from Hornet players and fans, a second meeting was canceled but the playoff meeting was unavoidable. Tuesday’s game was moved to Buck Hard Field at Burlington High School and fans from both schools were prohibited. Media was initially banned until the threat of a legal challenge to that rule helped reverse policy; a contingent of around a dozen reporters and photographers were present to document a game that ended with no spectacle beyond high-quality soccer.

“We handled everything really well, honestly. They acted with a lot of maturity,” Swainbank said of his players’ response to the unique circumstances. “It was a tough season, kind of a cloud over all the accomplishments that we had this year. But they were fun, we kept them focused on their job and they came to work every day in practice to get themselves better and they were rewarded today.”

Hutchins said that for all the attention from outside the program since that first game against the Spartans, he and his teammates have great respect for Winooski.

“They’ve been our toughest opponent so far and they proved that today, they’re such a great team. We really love playing them, they’re all good at soccer.”

Once play got going, Enosburg was on its heels first. Hornet goalie Ethan Jackson, who finished with seven saves, was called upon in the opening 10 minutes to intercept a pair of dangerous crosses. On Enosburg’s first real push at the WHS goal, Danny Antillon was taken down just outside the Spartan box and Webb stepped up to crush the free-kick into the Winooski goal for a 1-0 Hornet lead with just over 14 minutes gone.

The confidence with which Webb smashed the shot would have made one think he knew he was going to shoot the moment Antillon hit the turf, but Webb says that wasn’t the case.

“No. I knew a little bit later once I saw where their wall was positioned, then I knew I was going to shoot it,” said Enosburg’s new career goals leader, with a total of 56 after Tuesday. “We knew that was going to be the big goal, that the first one was going to win it. So we had to come out with the intensity really high and we got the first one.”

Enosburg didn’t muster another shot on the Winooski goal the rest of the first half but didn’t yield much either. Peter Stiebris, part of a tremendous backline with Lawrence Harness, Ethan Hogaboom, and Gavin Combs, made two difficult defensive stops in the final three minutes of the first half to keep Enosburg ahead 1-0 at the break.

With 3:28 gone after halftime, Antillon set Webb up for another goal a bit more directly than he’d done the first time, feeding Webb at the top of the Spartan box. A clever fake and pullback gave Webb an opening and he made it a 2-0 Hornet lead with a strong shot to the keeper’s left.

Enosburg had great luck with its lead in the first half thanks to Jackson, a great back four and disciplined midfield play from the likes of Blair Archambault, Antillon, Hutchins, and Shea Howrigan. But soon after doubling its lead, the Hornets let Winooski right back into the game with a header from a corner kick to cut the deficit to 2-1 with 33:01 still to play.

An odd-looking series brought Winooski all the way back into things with 16 minutes left in regulation. A ball bounced harmlessly to Jackson, who caught it a second or two before Winooski’s Yusufu Mami ran past. Mami abruptly fell to the ground and screamed as his teammates shouted for a call to be made. Referees instructed players to head to their benches in an apparent attempt to simply calm everyone down and avoid a possible repeat of their regular-season meeting. During the pause, officials conferred and determined that Jackson had initiated unnecessary contact with Mami and awarded a penalty kick, which Emmanuel Omar scored to knot the game at 2-2.

Whatever happened leading up to the penalty, Jackson responded beautifully, catching a dangerous corner, coming up with a diving save, and blocking a Winooski breakaway to hold the Spartans scoreless the rest of the way.

“He’s just been solid all year, this is his 12th shutout I believe – it’s a combination, (Silas) Kane’s been in there for some of those shutouts as well but 12 shutouts total,” Swainbank said of Jackson. “Some of those games we weren’t really tested a lot, but today we were definitely tested a lot and Ethan rose to the challenge.”

“I’ve had Ethan as a goalie for two or three years now so I know him pretty well and I really trust him back there,” Webb said of his goalie.

Most of Jackson’s late heroics came in the name of protecting a lead. Just three minutes after Winooski knotted things at 2-2, Webb led Hutchins into the Spartan box and Hutchins placed a clever shot which was tapped by the keeper but couldn’t be kept out, giving Enosburg a 3-2 lead for the final 12:45.

“It was a beautiful pass he put through the middle for me and I was able to slot it home, I couldn’t have been any more excited. It was honestly kind of like a dream,” said Hutchins.

Enosburg now gets a chance, this time with fans present, to cap this unusual season with a crown. No. 1 Green Mountain (14-1-1) ended Enosburg’s season in last year’s semifinal round, but Saturday’s championship will be played on neutral turf at Hartford High School. Enosburg has only been to two title games, winning a crown in 2006 and tying Fair Haven in 1997.

“They were disappointed a year ago when we lost at Green Mountain in the semifinal,” Swainbank said of his veteran group. “We had a long ride there, played against a team we really knew very little about and a field we’ve never been on and I think they really took it to us. I think this year they decided we’re really going to get it together and we’re really going to make a strong run.”

That strong run will come to a close Saturday in Hartford. Game time will be 1pm. 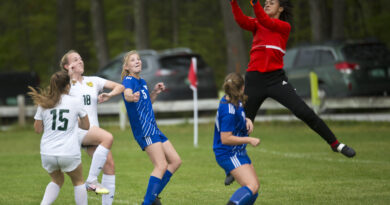 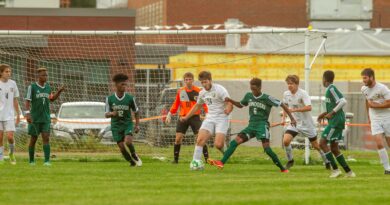 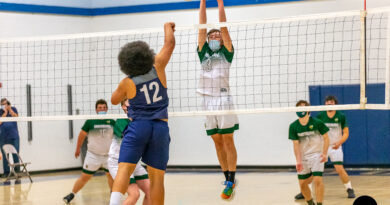 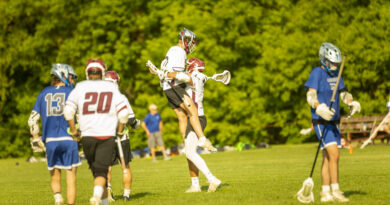 AFTER BIG UPSETS, MISSISQUOI TEAMS PREPARE FOR NEXT ROUND