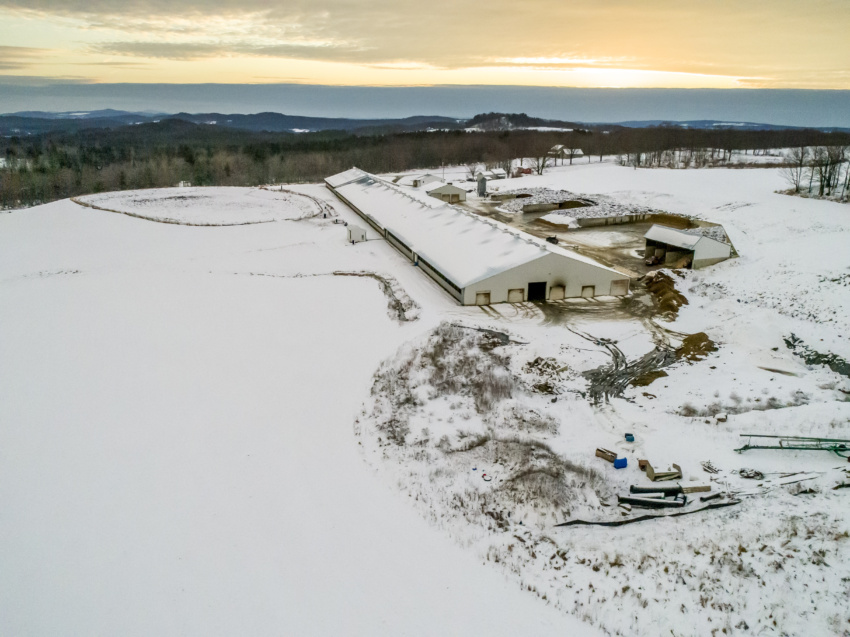 The lawsuit is for violations of Vermont’s agricultural laws and regulations, Donovan said.

The alleged violations stem from actions at the Lumbra Farm in Berkshire, located on Skunk Hollow RD. That farm is owned by the St. Pierres and operated as part of the Pleasant Valley Farms operation, according to Donovan’s office.

In the complaint Donovan’s office filed, they allege the St. Pierres expanded an existing barn in 2017, a farm formerly known as the Lumbra Farm. Donovan said they did this without obtaining the necessary permits and approvals and without providing required advanced notice to the Vermont Agency of Agriculture, Food and Markets.

“We have a long and proud tradition of farming, agriculture, and environmental stewardship in Vermont,” said Attorney General Donovan in front of the Franklin County Civil Courthouse on Wednesday afternoon, “We need to continue to support our farmers while also protecting water quality and the environment by applying these rules across the board.”

In addition to claims relating to the failure to obtain necessary permits and pre-construction approval, the State has alleged violations of Vermont’s Required Agricultural Practices (RAPs) for the farm’s failure to have a nutrient management plan or maintain necessary documents during a 2018 inspection of the Lumbra Farm by the Agency of Agriculture, Food and Markets.

The standards are required by law, governing farms of all types within Vermont, ensuring that the farms must be managed to assure agricultural pollution does not reach Vermont’s waters.

The State’s seven-count complaint, which was filed in the Vermont Superior Court, Franklin Unit today, seeks an order requiring that Pleasant Valley Farms and the St. Pierres, among other things apply for a Large Farm Operation (LFO) permit for the Lumbra Farm, bring the Lumbra Farm into compliance with all required RAPs and large farm operation rules, and pay civil penalties as permitted by law.

The Vermont Agency of Agriculture, Food and Markets has worked with the Vermont Attorney General’s Office in all aspects of this enforcement matter, according to Donovan.

The state was initially tipped off to the expanded barn by a citizens group called Regeneration Vermont. That group filed for public records relating to the permitting of the Lumbra Farm and were notified that there was never a permit filed.

The farm expansion was in 2017, and regulators began investigating it in 2018. Since then Pleasant Valley Farm has applied for a medium farm operation permit for the Lumbra Farm but was denied that permit because their overall operation would be classified as a large farm operation, according to Donovan.

The St. Pierres have filed an appeal with the Supreme Court on the ruling that the Lumbra Farm does not fall under the medium farm umbrella, according to Donovan.

In addition to ordering the St. Pierres to obtain a Large Farm Permit, Donovan’s office is asking the court to order a civil fine in the case. No amount was outlined in the complaint for that civil fine, and Donovan said he would not speculate at this point in time what that amount could be.

Recent civil fines for other water quality violations that the Attorney General’s Office prosecuted ranges from $14,000 to $45,000.

One of those violations was in 2016 when wastewater from the main farm was discharged accidentally into Godin Brook, and eventually into the Missisquoi River. In that case the St. Pierres were fined $14,000.

State Statutes allow for civil fines of up to $42,500 per day that a violation continues.