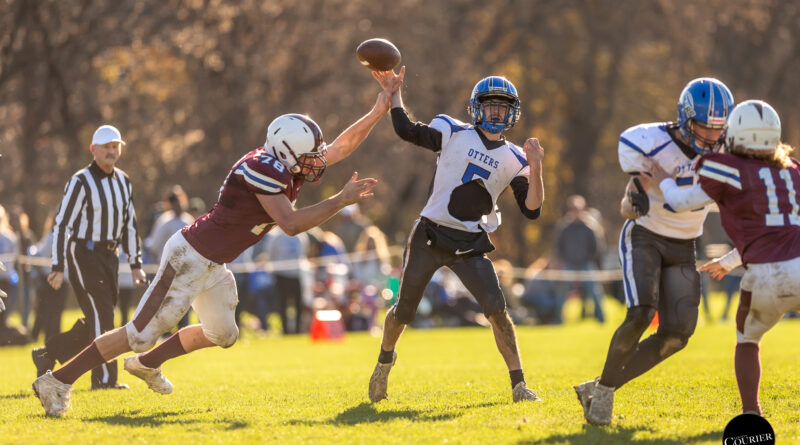 Bullets Ryan Goodman was instrumental in helping Fairfax to dominate the D-2 Semifinal against Otter Valley as he blocked a quarterback pass. Earlier in the game he recovered an Otter fumble, racked up some tackles, and had a sack as Fairfax defeated Oxbow in the D-3 Semifinal, 28-14. Rachel N. Lamoureux, County Courier
Sports
November 8, 2021November 8, 2021 County Courier

FAIRFAX – On a beautiful Saturday afternoon, BFA-Fairfax/Lamoille hosted a tough Otter Valley team in the Division III semifinal. The Bullets totaled most of its 172 yards in the first half, jumping out to a 21-6 lead at the break. The Otters air attack struck too late in the comeback attempt as they fell 28-14 and Fairfax/Lamoille advanced to Saturday’s championship game against top-ranked Windsor.

The No. 2 Bullets (7-1) quickly erupted for its first touchdown on its very first drive. Kenny Salls found his way up the middle for 36 yards and two first downs in two plays. After the No. 3 Otters (6-4) stopped BFA/LU’s initial goal-line plays, Salls pounded his way to the end zone with a nine-yard rush to put the Bullets up 7-0. The following five drives between the two teams ended up in punts until halfway through the second quarter.

Fairfax/Lamoille was running a draw play with seven minutes to play in the second, but an offensive lineman got a little eager and false-started, however, Salls quickly earned that back with a five-yard rush to the right. The next play was a direct snap to Salls, and instead of running it, he threw it downfield to Riley Greene for 24 yards. Salls continued his dominance and ran for 13 yards down to the one-yard line, which set up Teddy Munson for the touchdown to extend the lead to 14-0.

“Balancing the pass and the run game brings a whole new aspect to our offense,” said Salls, noting that last year’s switch to flag football due to COVID had a silver lining. “Ever since last year, it’s kinda like a devil’s angel. It sucked, but it gave us an opportunity that we can actually be a split offense.”

BFA recovered an Otter Valley fumble which set them up on their 40-yard line. Its first play was an out-route to tight end Sawyer Fagnant, who brought it down to the one-yard line. Salls collected his second score of the game after he finished off the big drive with a touchdown right before the half to make it a 21-0 Bullet lead..

“It feels great, we have worked for it all year long,” said Salls. “But like I tell everyone else, I can’t do it without the linemen. I love to take some credit, but those boys put in the work every single day, it’s a team thing.”

The final minute and thirty seconds of the first half were executed perfectly by Otter Valley. They returned the kickoff to the 40-yard line. Its first three plays were incomplete, but the fourth was a 26-yard catch-and-run by Brady Diaz. Munson and Nick Bidwell teamed up and sacked the quarterback to set up a fourth down. Diaz avoided another tackle for loss in the next play with 48 seconds left, reversed the field and got the first down. The crowd was in disbelief when, with 28 seconds left, the Otters launched a final push. Once again, it came down to a fourth-down play. With nine seconds left, Caleb Whitney passed to Tucker Babcock for six points. The 2pt attempt was no good, but they went into halftime much happier than they’d have been with a shutout, now down 21-6.

In the second half for Otter Valley, they had good drives that did not end the way they wanted. Early in the third quarter, Otter Valley’s quarterback stole the show, rushing for eight yards and following it up with a 37-yard pass to Diaz to the 24-yard line. The Bullets stepped up with two tackles for losses and Cooper Harvey disrupted a touchdown try on fourth down to keep OV from adding more points. Later in the quarter, Ryan Goodman started to have a field day. With the Otters at the ten, Goodman had two tackles for losses, a sack, and a QB pressure that led to an overthrown ball.

“It meant a lot today to play big-time defense,” said Goodman. “Having that pass rush is really nice when you’re going against a passing team”

Otter Valley’s next possession cut the deficit to a touchdown in one play. Whitney took his three-step drop, and with three linemen running at him, completed the pass to Diaz for a 42-yard touchdown on a wide receiver screen. This time the Otters converted the two-point try. Fairfax/Lamoille immediately followed up with a touchdown of its own. Salls obtained his third touchdown of the game after a five-minute drive that went for 50 yards. He helped BFA push its lead back to 14 points with five minutes to play, 28-14.

Otter Valley started the ensuing drive with a muffed kick return which stuck them at their ten-yard line. The Whitney to Diaz connection almost burned Fairfax/Lamoille once more but Greene skillfully broke up a potential touchdown play. Goodman ended the Otter’s drive with a big sack, forcing them to punt.

“Ryan Goodman had a few really good sacks for us,” said BFA head coach Craig Sleeman. “He had a couple of big punts for us too, but he and the whole defense played really well today.”

Whitney had a final chance to make it competitive, but Goodman and Salls both got to him and made OV’s final drive a scoreless endeavor. With the 28-14 win BFA Fairfax will move on to the championship game vs. the No. 1 Windsor Yellow Jackets (8-0), who beat Fairfax/Lamoille earlier this season, 53-35.

“We are expecting a lot of the things we saw today, blitzing and crowding the line of scrimmage,” said coach Sleeman. “This week, it will be to take care of your assignments, block your block, don’t get frazzled by the blitzes because we have seen it now. Let’s do what we need to do and rely on that senior leadership to get us through the rough moments.”

“We are feeling great about the final game,” said Salls. “We have confidence in our coaching staff to work on some new stuff and get new looks to beat them in the championship, hopefully.”

“From this game, we can take away our discipline. Trusting in each other to get it done,” said Goodman.

Fairfax/Lamoille’s chance to avenge its only loss of the season and win its second-ever championship (2012) comes Saturday at Rutland High School at a time yet to be determined. 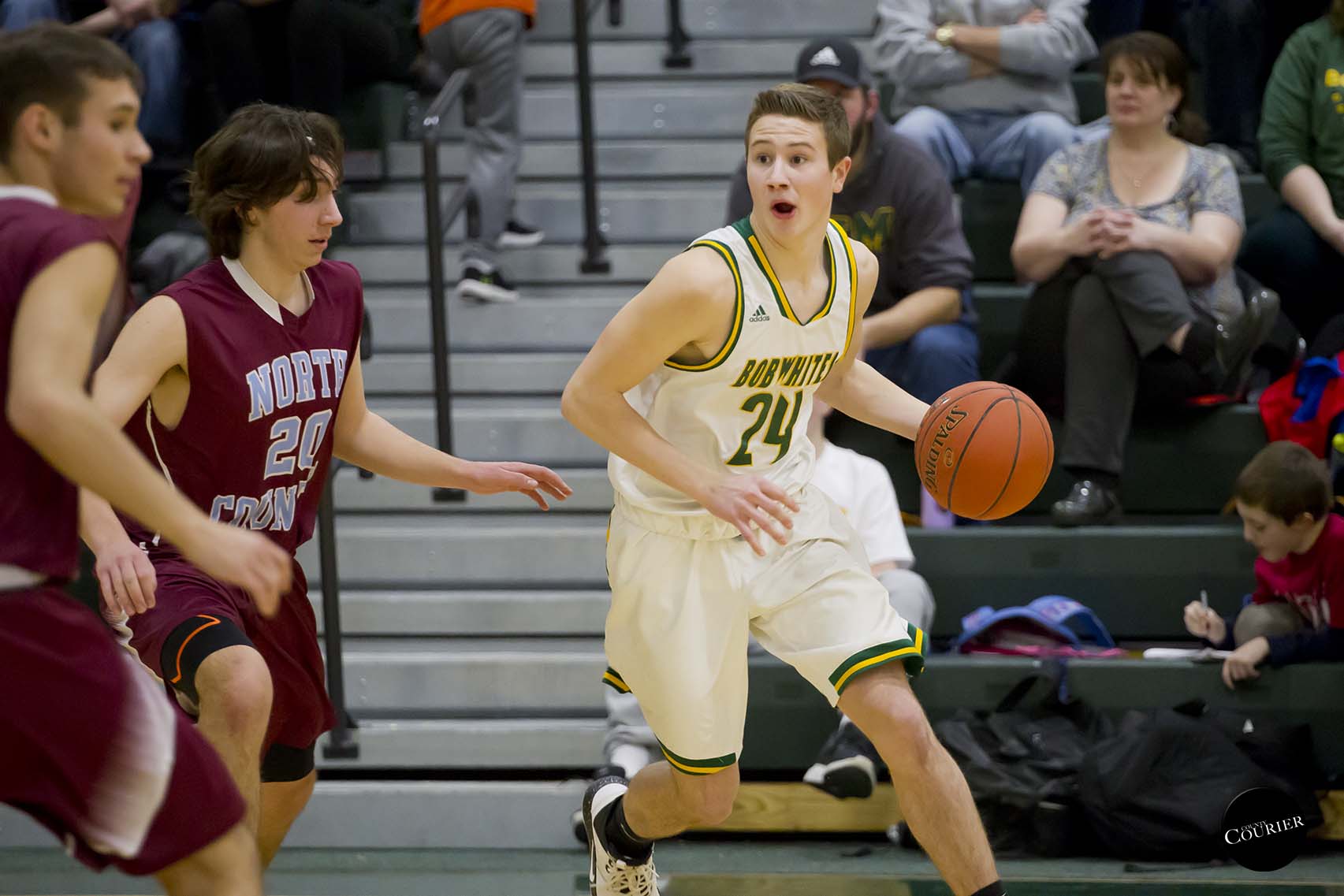 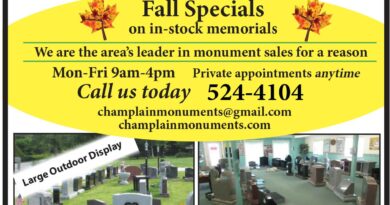 A GAME TWO DECADES IN THE MAKING 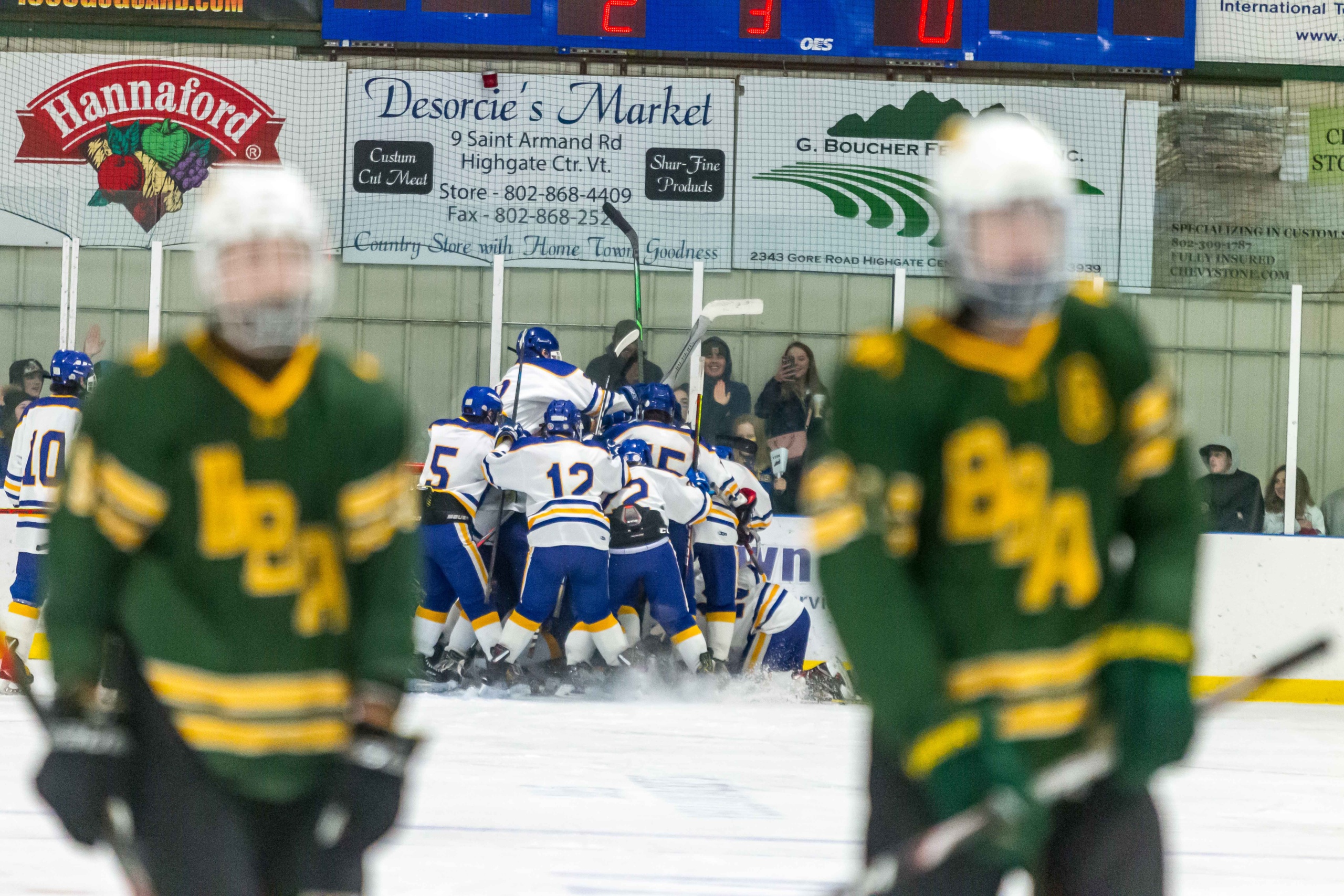 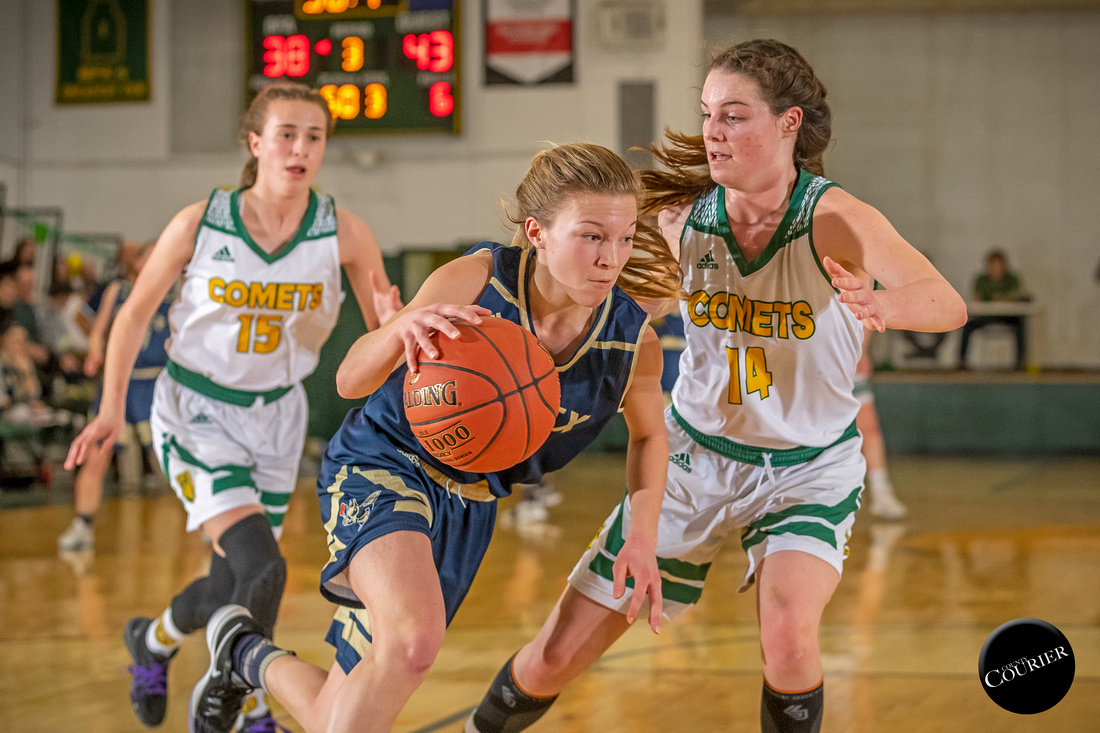 A LOOK AHEAD AT BOBWHITES VS. THUNDERBIRDS (ROUND 2)